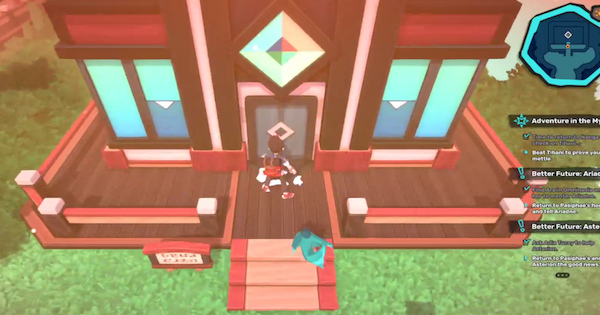 Check out this guide for a walkthrough up to the Nanga Dojo and the Dojo Leader Tihani battle including tips, recommended Temtem for the 3rd Dojo & more!!!

Catchable Temtem In This Area

Train Up Your Water Tems!

This area is full of Fire-type Temtems which can be easily dispatched with water moves, making this a perfect place to farm a little bit of exp. Make sure you catch a Fire Temtem if you haven't already! We recommend Banapi, as its evolution will have the highest Speed stat, alongside a good Attack.

The Tamers in this area tend to be weak to Water moves, so you should be fine. Remember to bring Electric moves for Barnshe and Houchic!

Save Your Water And Electric Tems For The End

Dr. Hamijo has a relatively varied pool of Tems, but 3 of them are still weak to Electric, while two are weak to Water, & two to Toxic. However, he leads with Gazuma, so don't start with your Water Tems out!

It will be important to have a full-health Electric or Water Tem ready to deal with Zaobian. As such, refrain from using those as long as you can, or heal them before they come out!

While Saipat can do damage if you let it get Rage off, in general, your attention should be focused on Zaobian. Its Turbo Attack can do massive damage & it is quite a threat, so focus your Water & Electric moves on it ASAP.

Head Back East To Nanga

Pick Up Items With The Crystal Skates

On the way back make sure to pick up the two chests accessible only by skating. As you will lose the Skates later on in the game, it's important to get all the items you can with them now!

The Tamers in this Dojo use a wide variety of Tems, not only Fire/Nature ones! This means you'll need a well-balanced team to succeed. However, a strong Nature, Water, Electric, & Fire type will generally allow you to deal super-effective damage to almost every Tem!

Optional Battles On The Sides

The two battles on the side of the Dojo where you enter are optional, but are recommended. One will lead you to the Pansunscreen, which prevents burns, and the other will give you TC006: Magma Cannon. This is a powerful Fire Technique that's worth teaching to any Temtem that can learn it!

In the middle of the Dojo you'll come across a puzzle of tiles floating on lava. The key here is to watch the movement of the tile on the 3rd row! An empty tile will appear after 5 grassy ones, so time your movements carefully!

You'll face off against One-Eyed Matthew as the third-to-last fight before the Dojo Leader. He isn't particularly difficult, so as long as you have a Water, Wind, or Electric type, you should be okay!

These two Tems are Nature/Wind type, which gives them resistances to Water, Nature, & Wind moves. All 3 of these are common on Tihani's team, but make sure to bring them out after you finish off Mastione!

Course TC:007, which can be found just east of the Nanga Dojo, will give you a powerful super-effective move against 4 of Tihani's Tems! If you have this move available on as many Tems as possible, you'll be able to come out on top even at a level disadvantage.

Be ready to have a full-health Tem, ideally with high Special Defense, ready to soak Beta Burst. It's also worth using a Balm+ here just to survive through it until Kinu exhausts itself.