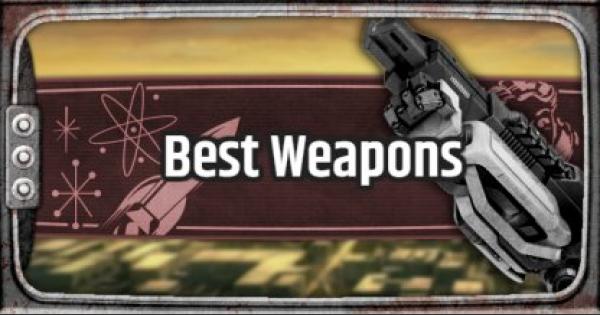 Check out the best weapons to use in Fallout 76! Learn about why the weapons listed here are handy tools to have in the wasteland. Weapon traits, stats, & tips included.

The best weapons must also be able to let the player adapt to different situations, whether it be in long-range, or close combat situations. These weapons must allow players to be a threat at any given circumstance.

The best weapons in the game must also be able to dish out major damage, either by being able to deal tons of damage, or by unloading bullets at a fast rate.

A great weapon must not only be able to deal high damage, but also hit its target consistently. Guns with a high accuracy stat, or low recoil are selected because of this.

Weapons listed in this section are ordered by how early you will be able to acquire them within the game. These weapons will be listed from earliest at the top.

Due to the abundance of it and its ammunition, the Short Hunting Rifle is a great go-to weapon. Getting sneak attacks lets you 1-shot low level enemies, and breaking is not a problem since you can loot it from killing enemies!

Due to its low fire rate, engage further away enemies immediately so that you have enough time and breathing space to take them down before they get to deal any damage to you!

The Short Double Barrel Shotgun can only fire two shots before needing to reload, however, those two shots can really pack a punch! Fighting enemies in close combat will be a breeze when using this weapon!

It is best to use this weapon in close quarter situations. This will let you get up close and personal with enemies, allowing you to shoot them down with the Shotgun!

The Perfect Storm is a great weapon to have because of its fast fire rate, damage over time, and abundant ammunition when out in the wastelands! Get your hands on this weapon as soon as possible!

Check Out How To Get The Perfect Storm

Leading enemies with this weapon is a good strategy. Drawing aggression from enemies will give you a clear shot of them as they run towards you. Walk backwards while shooting at them to efficiently kill enemies!

The Plasma Grenade is a devastating throwable to have in your arsenal when fighting enemies. Not only does it do 200 damage, but also does 200 energy damage as well!

Use the Plasma Grenade to deal damage over an area of effect. This will help you deal with large groups of enemies coming at you!

When attacking, this sickle has unique effects that take effect when it hits an enemy. Not only does it do 41 damage, but it also adds +50% limb damage, and reduces the target's damage output by 20% for 3 seconds!

Use this weapon to cripple enemies faster, and at the same time gain damage resistance while fighting. It puts you at a very big advantage when fighting other enemies wielding melee weapons!

The Laser Rifle possesses a good rate of fire and damage. It can also damage enemies from far away. The ammunition for the weapon is pretty common, found in robot enemies such as Protectrons, and Liberators.

This weapon is very effective against robotic enemies such as Assaultrons and Protectors. Consider using this weapon to get sneak kills from far away at robots!

Weapons that let you regenerate health lessen the need for health items such as Stimpaks and Healing Salves, but also do not run out of ammo! Some weapons like the above one, only require a few materials to repair as well!

Don't be afraid to go toe-to-toe with the enemy! The amount of regeneration these weapons give you will almost always ensure your survival when going against tough mobs, and even a high level enemy!

Here are some of the mods recommended to add to your best weapons to further improve their performance while out exploring the wastes!

Scopes and Long Barrels are mods that will increase the range of a certain weapon. This will help you deal more damage as attacks while you are hidden deal twice as much damage!