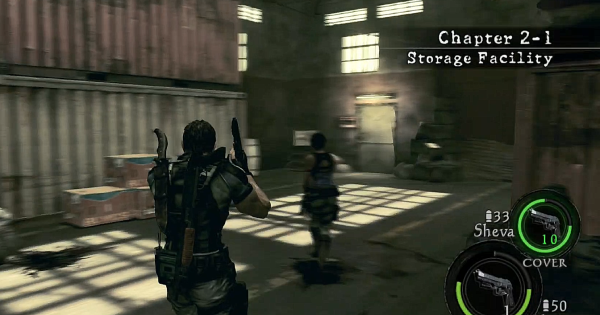 You will find a silver case inside the warehouse you start this chapter in. It contains an H&K MP5 Machine Gun. You can give your partner the other machine gun as an alternative weapon.

The warehouse you start in will have a chest on the upper cargo crates containing gold and an emblem to the left of the chest.

When going through the cargo crates, you'll encounter explosive fuse boxes that will trigger when the wires are cut. To avoid this, shoot at the fuse box to make them explode while you're a safe distance away.

Use Shotgun To Damage Dogs

Zombie dogs move fast and jump onto you when left alone. To deal heavy damage & knock them back, equip a shotgun and fire at them. This weapons is extremely effective in close range.

When you encounter and defeat a Big Man Majini, it'll drop a Jewel Bangle. This can be sold for money that can be used to upgrade weapons or buy supplies.

When you reach the bridge, make sure to shoot the red gas barrels to stop the truck. Failing to do so will make the truck run over you, resulting in death.

10. Shoot The Keys To Drop Them

When you reach the dock area and go into the small shack with the green door, look up to see a body hanging on the beams. Shoot the hooked keys to cause them to fall to the ground, you can pick them up after.

When you move forward from the pier, the helicopter will clear the way for you. Head into the building in front of you with the red door - you'll find a silver case with the S75 Sniper Rifle inside of it.

4. Use Machine Gun On Zombie Horde

When you're faced with a lot of zombies, equip a machine gun to deal fast damage on a crowd of enemies. This will help you take them down fast, without having them draw nearer to you.

6. Use Sniper Rifle To Cover For Partner

Since you just got a new sniper rifle, this is the perfect time to test and practice this weapon. Use this weapon to cover for your partner and keep them safe while they're going down the opposite building.

The Chainsaw Majini will stagger and drop its attacking stance when you deal enough damage to it. When it raises the chainsaw, hit its head and hands holding the chainsaw to stagger it.

The Chainsaw Majini will keep chasing after you. Look for the red explosive barrels on the field and kite the enemy around them. When they're near the barrel, shoot it to cause an explosion.

Use Incendiary Grenades To Clear Other Zombies

Other zombies will be around the area when you're fighting the Chainsaw Majini. Use Incendiary Grenades to deal A-o-E damage to both the boss & other mobs to clear out the area.

When you get hit by the Chainsaw Majini's attack, you'll get mauled to death and instantly have to restart the round. Make sure to keep your distance and run away from the enemy when its arms are raised.

During the Quick-Time-Event, you'll have to follow button prompts on the screen to complete it successfully. Make sure to react quickly & press the right commands.

At the very start of the chapter, check the wall on the right side of the map. It's right next to the closed metal opening of the warehouse.

Right after you cross the bridge, before entering the sewers, stop at the top of the stairs. Look at the wooden support beams of the bridge to find the emblem.

At the pier area, right in front of the small warehouse where you find the port keys, check the small green shack. Go behind it and point your gun at the roof. The emblem is stuck in the tight rafters.

Still at the pier area, right after you open the port door, head to the right of the area and climb up. Check the building across you to spot the emblem in between some columns on the 2nd floor.

On the ledge where you need to assist jump your partner, check the broken down post on your upper right. The emblem is right above you.