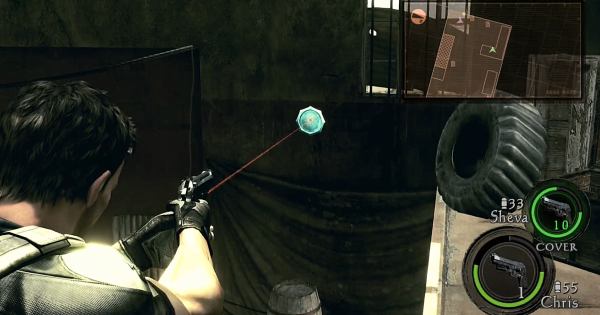 Check out this BSAA (B.S.A.A.) emblem locations guide and list per story mission & chapter in Resident Evil 5 (RE5). This includes where to find emblems, rewards, & more.

Check Out What To Do After Main Story!

Head to the opposite balcony upon reaching the house where there is a balcony with an Antique Clock. You'll find the emblem there.

When you reach the broken down house where there's black goop and dead Alpha Squad members, check the missing roof. Spot the water tank and you'll seed the emblem there.

After defeating the Uroboros, head to the exit but before leaving, check the wall on the right. Look through the metal fence to find this emblem.

At the very start of the chapter, check the wall on the right side of the map. The emblem is right next to the closed metal opening of the warehouse.

Right after you cross the bridge, before entering the sewers, stop at the top of the stairs. Look at the wooden support beams of the bridge to find the emblem.

At the pier area, right in front of the small warehouse where you find the port keys, check the small green shack. Go behind it and point your gun at the roof. The emblem is stuck in the tight rafters.

Still at the pier area, right after you open the port door, head to the right of the area and climb up. Check the building across you to spot the emblem in between some columns on the 2nd floor.

On the ledge where you need to assist jump your partner, check the broken down post on your upper right. The emblem is right above you.

As soon as you leave the starting point, check above you. The emblem will be on an electricity tower without any wires.

Chapter 2-2 Emblem 2 - Right Side Of Mine Bridge

When you head into the mines, keep going forward until you reach a wooden bridge. Check your right and you'll spot the emblem above you.

Chapter 2-2 Emblem 3 - Top Of Mine Buildings

After you leave the mines, climb up the tall red ladder and look towards the buildings you just came from. You'll spot the emblem on the roof of the mine buildings.

From the starting point, head towards your boat and check the solitary post in the middle of the water. The emblem is perched near the top of the post. Use a rifle to shoot it.

The 2nd emblem in this chapter can be found in the Chicken Farm in the middle of the lake. Check the hut's stairs to spot this emblem.

Sail to the upper left corner of the lake to find a couple of huts. Check the rafters to find the emblem location.

After unlocking the village door, jump down into the creek then turn around. You'll find the emblem located under the wooden platform.

After leaving the tribal village, you'll get to a small area with Tricell tents. Head to the back of them and check the sacks between the two tents to find the emblem lodged in place.

Right after Irving takes off on his boat, making you rush towards the escape boat, check the shed on your right. Open the red door to find the emblem on the right side of the shed.

You can spot this emblem under a metal platform right before you head into the first gate. If you're unable to hit it due to the boat's movement, you can still backtrack to its location when you alight to open the gate.

Near the starting point, head into the caves and climb up the wooden ladder. Check across the ravine to your right to find this emblem wedged in the rocky surface.

In the first big room that you go into, jump down. Before jumping down again, check below the giant crystal spire to the left of the area. The emblem is in the ledge beneath it.

When you reach the room with the statues, make sure to head to your right, jump across and go up the stairs. Locate the green statue and check the area on its upper right, the emblem is against a rock wall.

When you reach the last floor with the lasers, head into the room with the mutilated body. Turn around and check the arch of the door to find the emblem.

Before you head into the next area, move to the right side of the flower bed. Check the metal walkway to find the emblem leaning on a pipe.

After passing through the conveyor belt area with the gas tanks, make sure to check the trash dumpsters on the left after descending the stairs. The emblem is inside the left dumpster.

Before exiting the Uroboros boss fight area, check behind the giant metal fans. The fan on the right has the emblem behind it.

This emblem can be found on the platform where enemies pull levers to bring down the spinning platform. It's best to wait for the platform to fully stop or to slow down before attempting to shoot this emblem.

When you reach the area where the ruins begin again, before turning on the elevator, check the shaft. The emblem is on the same side as its lever, so move to the opposite side to spot it.

This is one of the trickiest emblems to hit. It's on the very top of the ship's tower and can only be hit by a rifle. Make sure to stand on a tall platform such as on the crane to see the emblem.

In the area where your partner gets caught under the cage, check the container beside the switch you need to shoot. Lob a grenade onto the container to break the emblem.

The last and final emblem can be found inside a glass case in the room with the flowers. Break the glass first before you can shoot the emblem.

What are BSAA Emblems?

Collectibles Found In Almost Every Stage

BSAA Emblems are bright green circles you can find in obscure places in different stages of the game. When you shoot them, they will break and will be recorded as collected.

When you collect these emblems, you'll unlock rewards in the Bonus Features section. This includes character costumes, figures, and more.

Check Out How To Get Infinite Ammo!
ユーザー登録のご案内