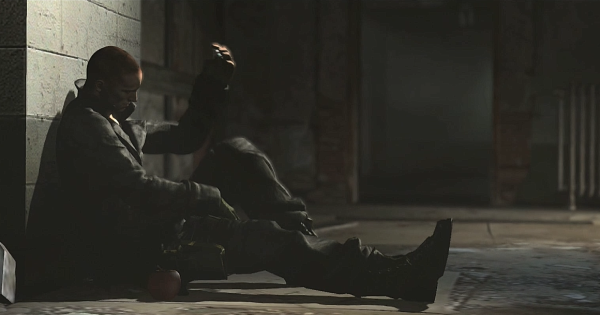 Aim For the Heads

Enemies in this section of the chapter do not have much health. You can quickly dispatch these enemies by aiming for the head for massive damage. This is easy to do since they do not move much when shooting at the chopper.

23. Running From the Helicopter

You will be running away from the chopper using a narrow ledge. Keep alert as there will be several quick time events to prevent you from falling off the ledge. Focus on running as there is no need to shoot back at the chopper.

No Need to Engage Enemies

You do not need to fight the enemies that appear when heading for the red gate. These enemies will spawn in different directions. They can overwhelm you if you stay in one place. It is recommended to keep moving to avoid getting pinned.

Keep Dashing to Avoid Getting Caught

Remember to dash to keep your distance from the Ustanak. Simply jogging away will allow the Ustanak to reach you, and fail the mission.

When it is time to save Sherry, keep an eye on your screen. A button prompt will appear in order for you to evade the Ustanak's attacks, and save Sherry at the same time.

The Elephant Killer is a powerful magnum weapon which you can get in the warehouse. Head up to the second floor, and you will find a hole in one of the walls. Enter this hole to find the Elephant Killer on a shelf.

Route Guide Will Not Function

While helping the BSAA, your route guide will not function. In order to quickly progress the mission, make sure to stay close to the BSAA unit as they destroy the gun turrets.

Enemies will start to approach the BSAA team as they place charges on the turrets. Stay close to the team and cover them by defeating the enemies that come too close.

Weak Spots Are the Red Sacs

The Ogroman's weak spots are the red sacs that bulge from its back. Shoot at these to deal massive damage and quickly stagger the Ogroman.

Recommended to Fight On the Second Floor

Second Ogroman will Not Have Sac Exposed

The second Ogroman will not have its weak spot exposed. Wait for it to get close to the electrical lines. The electric wires will shock it, allowing you to melee it and expose the red sac to your allies.

If you want to know where Ustanak's next position will be, keep an eye on your HUD for a red icon. Move away from the icon's general as this is where the Ustanak will appear next.

No Need to Waste Bullets

You do not need to use up your ammo when evading the Ustanak's attacks. After a certain number of attacks, you will then be prompted to jump to the nearby chopper.

2. Jumping to the Next Plane

Complete Quick Time Event to Get on Plane

When you jump to the next plane, you will need to complete a quick time event in order to successfully get on board the nearby chopper.

3. Using the Turrets Against the Ustanak

Shoot at the Choppers With the Ustanak

It is recommended to focus your fire on the choppers where the Ustanak is hanging from. This will force the Ustanak to change to the next chopper immediately.

5. Shooting the Ustanak Off the Plane

Shoot at the Gas Tank

When you are sliding down the plane, aim at the red gas tank near the Ustanak and shoot at it. This will cause a huge explosion which will blow away the Ustanak.

Before triggering the cutscene with the Ustanak, it is recommended to scope out the warehouse first. This will give you a lay of the land, and allow you to plan you strategy when fighting the Ustanak.

There will be several red barrels littered around the warehouse. Note where these barrels are since they will be important during the fight.

Let Down Ladders From Higher Floors

It is also recommended to let down ladders from upper floors when exploring the warehouse. These give you a quick escape if you ever get pinned in a certain spot and have nowhere else to go!

Lead the Ustanak Near Red Barrels

The only move that this boss will do is to charge at you. You can exploit this attack pattern by leading the Ustanak through pathways with several red barrels. Once the Ustanak is near a red barrel, shoot at it for massive damage!

Use Pauses Between Charges to Reposition

If you run out of barrels, use the pauses in between the Ustanak's attacks to quickly reposition to a new area with barrels.

As you exit the first building, proceed forward until you reach a dead end. Head to the left side and you'll spot the first emblem on the doorway of the dilapidated building.

After crossing the ravine, after leaving Sherry behind, you'll find the 2nd emblem on top of a single metal scaffolding. Make sure to shoot it before helping Sherry cross to where you are.

After your first escape from the Ustanak, go into the left room to find a toilet area. As Jake, throw a grenade above you, in the right area, across the ladder. As Sherry, ask to be hoisted above to find the emblem.

Once you reach the wide area, before moving forward, check the doorway across the plaza. The 4th emblem can be found there.