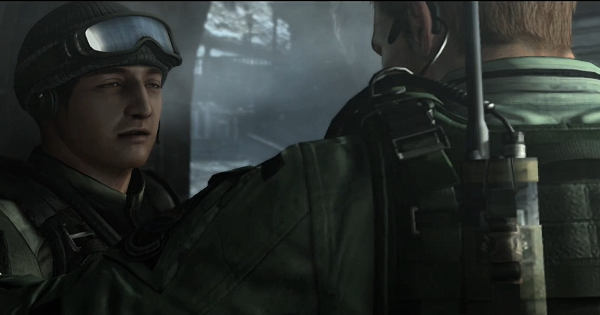 Utilize Cover to Avoid Getting Shot

J'avos are different from regular zombies in the sense that they move faster, and can use different types of weapons. Stay behind cover to keep you away from the line of fire & minimize damage taken.

Aim For the Red Sac on Its Back

The Ogroman's weak spot is found on its backside. Focus your fire on the Ogroman's red sac. When enough damage has been dealt to it, it will stagger and fall on its knees.

Melee the Ogroman For Massive Damage

Once the Ogroman is staggered, approach its arm and melee it. This will cause you to jump on it. Complete the quick-time event in order to deal massive damage to it.

Make sure to focus your fire on J'avos with rocket launchers as they deal huge splash damage to you and your allies. They can usually be found on top of train cars so keep an eye out for these enemies.

5. Crawling Up the Bridge

Soldier Is On the Left Side

When crawling, make your way to the left side of the bridge. The soldier will be waiting for you in this area. Crawling up to any other side will cause Chris to fall off the bridge.

Keep In Cover to Minimize Damage

The bridge will have several J'avos waiting for you. Make sure to keep in cover most of the time, and only break cover to push when the area is clear. This will minimize the damage that enemies can do to you.

Watch Out For Enemies On Upper Floors

Keep an eye out for enemies on the bridge's upper floors. If left unchecked, these enemies can deal huge damage to you, and will be a nuisance since they have the height advantage.

Fight On the Second Floor

It is recommended to fight Ogromans when you are on the second floor of buildings. This way, when the Ogroman is staggered, you can quickly get access to their arms, and melee them for massive damage.

Red Sacs are the Weak Spot

Just like the first Ogroman in this chapter, the weak spots are the bulging red spots on their backside. Once these have been damaged enough, the Ogroman will become staggered. This opens it up for devastating melee attacks.

Second Ogroman Will Not Have Its Sac Exposed

The second Ogroman will initially have its weak spot hidden. Deal enough damage to it in order to stagger it. Once you melee it and complete the quick-time event, the weak spot will appear.

While moving along the corridor with the mysterious figure, a J'avo will bust open a door to ambush you. After defeating it, enter the room where it came from to acquire the Assualt Shotgun.

Initially, Napads are heavily armored creatures. However, once enough damage has been done to them, their shells will peel off, making them more susceptible to damage.

At times, when Napads have no more protective shell, they can easily be staggered. When they are not moving much anymore, approach and melee them to deal massive damage!

2. Waiting For Team to Regroup

No Need to Engage Napads

You do not need to engage the Napads present in the lobby to progress through the city hall. As long as your team has regrouped, you will be able to open the door.

Use a High Damage Gun to Finish Them Quickly

Strelats are fast moving enemies that can be hard to get a lock on to. Use high damage weapons such as the shotgun to make quick work of these enemies to quickly bring them down.

When you reach the scene where you have to cover Finn as he plants explosives, head to the other end of the area. Check behind some metal grills to spot this emblem.

This emblem can only be found when using Piers in the bridge area. When covering Chris, check the right-most part of the bridge to see this emblem.

Upon reaching the City Hall in this chapter, before going up the stairs, check the corridors at the back of the hall. You can find the 3rd emblem on the wall between 2 paintings.

When Ada becomes part of your squad, check the room behind the white curtains in the right side of the area. The 4th emblem is on top of the metal cabinet in front of you.