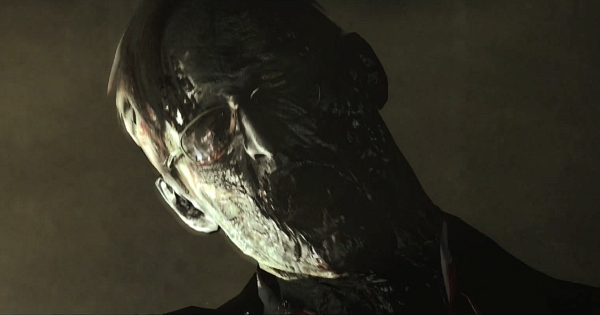 This section of the chapter is straightforward. No enemies will be spawning so you can progress through this section with ease.

Chapter 1 - Escape From the Campus

Escape From the Campus Walkthrough Chart

2~3. Fighting Zombies in the Elevator

Liz will immediately grab you. Complete the quick time event to successfully shake her off. She will then attack Helena. One shot is enough to defeat Liz.

In this part of the map, you will be fighting in a small enclosed space. Using your gun may be difficult since the enemies are very close to you. It is recommended to use melee attacks instead to deal with them.

Supplies Are At The Bottom Of The Stairwell

Before exiting the stairwell, make sure to take a good look around. After defeating the zombies in the area, search the area to find some ammo and herbs to help you out through the chapter.

13. Defeating Zombies Near the Exit

Incendiary Grenades Are In Nearby Classroom

Before facing the group of zombies near the exit, check the nearby classroom for some useful items. There will be some incendiary grenades and some ammo which will help you deal with multiple zombies at once.

17. Defending Yourself From Zombies

There will be several enemies heading your way. It is recommended to mix and match gunplay and melee combat. This way, you will be able to preserve bullets, and defend yourself from zombies that get too close.

Use Grenades to Control Crowds

If you still have some on your person, you can opt to use the Incendiary Grenades to control a large amount of enemies. This way, you can avoid getting overwhelmed in terms of numbers.

Key Is In the Sun Visor

When looking for the key, focus your view onto the car's sun visor. A prompt will appear to open it. The key used to start the car can be found here.

Chapter 1 - Navigate Through the Subway

Navigate Through the Subway Walkthrough Chart

Watch Out For Oncoming Trains

Remember to keep an eye out for incoming trains. When you see or hear one approaching, it is best to move to the side away from the tracks. This will let you safely avoid the train.

The horde of zombies in the subway has quite a few enemies. It would be best to use AoE weapons such as grenades and bombs in order to instantly damage a number of them.

Keep an Eye Out For Trains

You will also need to keep an eye out for oncoming trains. Be on your guard as getting run over by the train instantly kills you.

13. Defeating Zombies By The Gate

Zombies Can Spit At You

The zombies that you encounter in this section of the chapter will be able to spit projectiles that damage you upon impact. It is best to keep a safe distance away from these enemies so you can dodge their projectile attacks.

It is your top priority to kill the Shrieker when faced with a horde of zombies. The Shrieker has the ability to attract multiple enemies to your location, so it would be best to focus on the Shrieker first to prevent that from happening.

Shrieker's Weak Spot Is Its Throat

The Shrieker's weak spot is its throat. Shoot at it when it bulges and turns red to deal massive damage to the Shrieker.

There will be a Shrieker present during this section of the chapter. Make sure to prioritize killing it first so that no more zombies appear.

An out of control ambulance will show up during the fight. Try to get as far away from it as you can get run over by the car.

2. Defeating Zombies In the Gun Shop

You will have your first encounter with the Bloodshot during this part of the chapter. These enemies move much faster and are more durable than the regular zombie. However, its chest and back are weak spots when they start to throb.

Enemies Can Turn into Bloodshots

Keep an eye out for enemies with red eyes. Once they receive enough damage, they can shed their skin and turn into Bloodshots. Aim for their weak spots to quickly dispatch them.

6. Defeating Zombies in the Small Room

A Whopper is a large mutation of the normal zombie. They are very durable and strong, but move very slowly due to their weight. Shoot at its legs and feet since these are its weak spots.

It is best to focus your fire on the Whopper blocking your path. Since you cannot aim at its feet, shoot at its head and use the shotgun to deal massive amount of damage to the enemy.

When you enter the janitor's closet and meet Liz's dad, don't leave the room yet. Check around for shutters and you'll spot the emblem on the sill.

After crossing the courtyard and going into the staff building, survive the zombie attack then head into the rooms. The emblem is inside an office desk in the room before getting the keycard.

In the subway, after dodging two trains and opening a door, proceed through the corridor to open a red door. Check the right side and look at the bottom of the train to find this emblem.

The 4th emblem in Chapter 1 can be found after tossing your partner across a gap to open a gate. It's on top of a bar table. When you exit the bar, the gas station fight will begin.