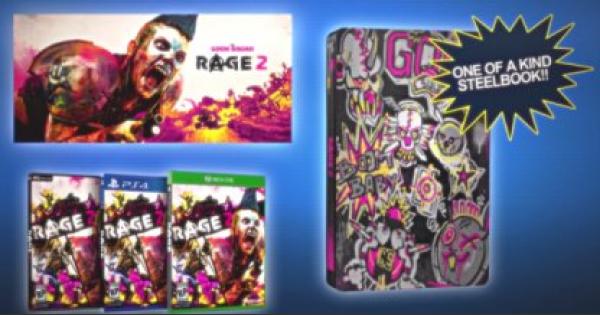 RAGE 2
Which Edition To Get - Price & Bonus Content Comparison

Check out this RAGE 2 guide for info about the game's editions & packages; including bonus content & version differences, DLC, feature inclusions and prices!

Which Edition Of RAGE 2 Should You Get?

Get Standard Edition For Those New To RAGE

The standard edition is recommended for players new to the RAGE series, especially those who are still unfamiliar with the setting and first-person shooting gameplay.

The Deluxe Edition of RAGE 2 will include a bevy of in-game bonuses that will help in gameplay and also provide new looks to standard skins. It's for people more experienced in the series and want to have an edge in the game.

The Collector's Edition is highly recommended for fans of RAGE and those looking to add to their game collection. This edition comes with physical bonuses alongside pre-order & digital ones, giving a full luxurious experience.

In this mission, Walker goes against a cult that has started worshipping Nicholas Raine, the hero of the first RAGE game.

The Base Game Edition Of RAGE 2

This is the standard edition of RAGE 2 and will include the base game as well as pre-order bonuses. If ordered via the PSN store, players will receive a RAGE 2 official static theme.

The Deluxe Edition will have the base game, pre-order bonuses with the addition of in-game content such as the expansion, DOOM BFG, cheat codes & progress booster, and a battle standard.

The Collector's Edition will have all of the pre-order bonuses, bonuses from the Deluxe Edition, and several physical item bonuses. This includes a figure, steelbook case, and collector's poster.