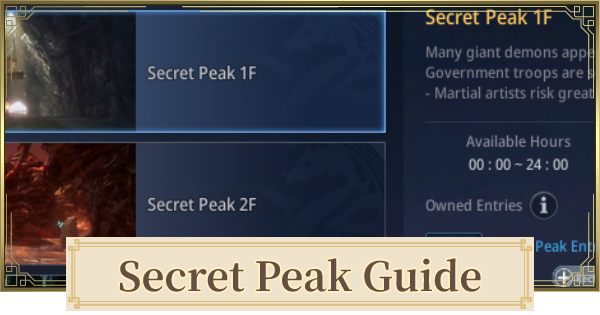 This is a map guide for the Secret Peak in the game MIR4. Learn more about the Secret Peak map, epic and legendary darksteel spots, boss guides and respawn times, and mob hunting!

※ We will continue to update the map as we find more epic or legendary resource points.

Above is the map where Epic and Legendary grade resource points can be found in the Secret Peak. It is important to remember that PvP is enable in the Secret Peak and these point may be heavily contested by multiple players in order to monopolize the resource.

There are multiple bosses in the Secret Peak. Some of them spawn at fixed intervals and some can be spawned manually using badges from the NPCs. Most players farm bosses through summon badges but killing bosses that naturally spawn is also a good thing since you can save on soul crystals needed to get summon badges.

We'd recommend you to hunt bosses above as they will usually drop chests much.

Respawn Time Of The Bosses

Based on our observation, the boss specified in the map respawns at specific time(server time). Please let us know if the above time table is incorrect!

What To Farm From Bosses

The main goal of killing bosses in the Secret Peak is to get the Rare Material Chests that drop after killing the boss. These Material Chests give the player Skill Tomes materials which can be exchanged in Arcadia Spirit Village.

※ It is important to be vigilant because other players can open the chests that appear after killing the boss.

There are a few spots in the Secret Peak which are effective for mob hunting. A good thing to remember when looking for a hunting spot is to find a group of enemies that are naturally aggressive to help you with pulling multiple mobs.

Why Do You Need To Hunt Mobs?

The main goals of Mob Hunting is to get EXP, farm Soul Crystals and Ancient Coins. Soul Crystals are used on the Secret Peak NPCs to buy various thing which are primarily Boss Summon Badges and player enhancement items. EXP you get is comparatively high given the level of enemies.

Each floor in the Secret Peak requires players to reach a certain Power Score before they are able to enter. Each floor doesn't not require the player to be at a certain level but having a higher level greatly helps in increasing the player's Power Score in order to enter higher floors.

Entering higher floors in the Secret Peak will allow you to get more amount & higher grade materials from farming resources, bosses and mobs.

Even if you can already access a higher floor, it is important to enter the appropriate floor depending on your character's needs. A good strategy is enter lower floors where you can easily kill bosses and farm more materials with less time spent in the Secret Peak.
ユーザー登録のご案内