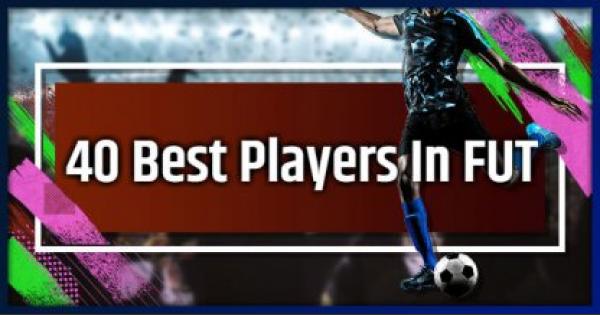 Learn about the top 40 players in FIFA Ultimate Team! A guide to utilize the players featured here if you get them in FUT! Dominate the competition with these players and score lots of goals.

The Best Players In FIFA

This guide will be divided into the best Strikers & Wings, Best Midfielders, Best Defenders, and Best Goalkeepers. This was done to help balance out the number of best players per position.

A few players in the rankings may share similar overall ratings with other players who did not make it into the top 40. Chosen players were included because they excelled in certain stats more suited to their position.

Strikers (ST), and Centre-Forwards (CF) are the main scorers for the team. They rely heavily in Pace and Shooting stats to out-maneuver defenders and easily score goals.

Wings (LW / RW) will be seen on either side of the pitch near the opposing team's goal. They help out in scoring by crossing the ball to the Striker, or can shoot the ball into the goal themselves.

Midfielders will help you get the ball from point A to point B. These players have superb passing skills, and will help improve the team by easily getting the ball from one side of the field to the other!

Midfielder (CM / LM / RM) are placed in the center of the field. These players excel in dribbling, and passing stats to help move the ball around the pitch.

Central Attacking Midfielders (CAM) excel in the same stats that midfielders do, but also have good shooting stats. These help them shoot the ball if they see an opportunity to score a goal!

Central Defending Midfielders (CDM) provide additional support to defenders while playing. They serve as the frontlines before the opposition can face the defenders.

Defenders will be your last line of defense before the enemy can attempt a goal against your goalie.

Centre Backs (CB) will be your blanket of security before the opponent has a chance to score a goal. They usually have great defending and physical stats.

Side Backs (LB / RB) are responsible for defending the goal against side attacks and potential threats from Wingers. Just like Centre Backs, they also excel in defending and physical stats.

Goalkeepers are the players that separate your enemy from scoring a goal. They are the ones that guard the goal from opponents who attempt goals, free kicks and more. Here are some of the best goalkeepers around!