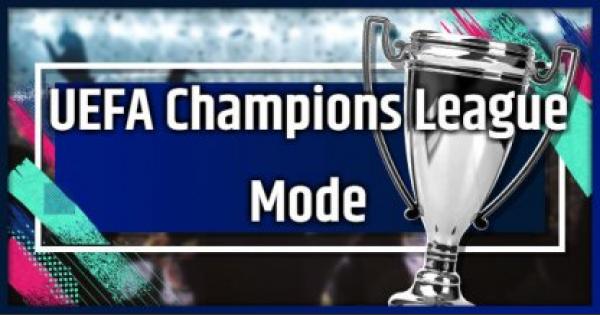 Take part in one of the most prestigious competitions in the world: The UEFA Champions League. Learn everything you need to know about the game mode, and tips and tricks to win!

Play against world class teams and aim to be the best in the world in the UEFA Champions League, a new game mode introduced in FIFA 19!

Related To Other Game Modes

This prestigious competition is plays a part in each of the game modes available to play in FIFA 19. Be it in Kick Off, Career Mode, FUT, The Journey, or on its own, you will be able to take part in this competition.

Play How You Want

You will be able to play this game mode the way you want. You can choose which stage you will be playing in. Stages include:

Stages In The UEFA Champions League

How To Select The UCL Mode

These are the playable teams in the UEFA Champions League Mode

As a new mode introduced in FIFA 19, the UCL Mode brings with it a host of new features!

Alongside this mode, new commentary has been recorded by Derek Rae and Lee Dixon, two seasoned commentators of the game. This gives each moment a more authentic feel.

New stadiums have been added to showcase different arenas being used for the Champions League.

New Stadiums have been added to include venues from the Premiere League, La Liga, Bundesliga, and more!

Here are some tips to remember to be the best team in the world!

Learn The Mechanics Of Each Stage

Familiarize Yourself With Teams

Know who you will be going up against to better plan out your strategy for winning against them! It is good to have at least some knowledge of key players in certain teams you have to watch out for.

Play Defensively During The Group Stage

Check Out How To Defend Like A Pro Here

Be Aggressive During The Semis

Try to fight for the ball and score goals if you find yourself having less goals than your opponent. Try to rack up as many points as you can to secure the win in the semis.

Check Out How To Attack Here
ユーザー登録のご案内