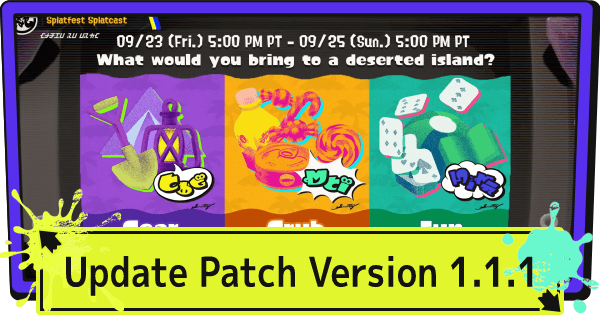 Splatfest Will Start On The 24th

The first release of Splatfest will be held from September 24 to 26 and the theme will be "What would you bring to a deserted island?".

Rate Of Tricolor Battle Has Been Adjusted

Version 1.1.1 seems to significantly reduce the occurrence of Tricolor Battle. There is a reaction that the teams sandwiched in the one in the middle which is too unfortunate. With that said, is the adjustment appropriate?

・Adjustment of the rate of occurrence for Tricolor Battle and change it to a certain level of less than the defending team.

New Weapons Will Be Released

During the rotation that happens once every three months, the announcement of new weapons will be added. It is said that additional content such as weapons will continue for the following couple of years since the release.

The rank cap will be increased further and the X band will be released in future updates. In addition, the League Battle, which also existed in Splatoon 2, will be implemented as well.

Although only the silhouette is shown, the implementation of a large update is also introduced. If you look closely, it looks like a duo that appeared in the previous Splatoon 2 DLC. Could it be a DLC too but for Splatoon 3?

Big Run will be added to Salmon Run by update. Details are still unknown but it seems to be a different one from the normal Salmon Run.

How To Update Splatoon 3

If you turn on the automatic software from the main unit settings, the update will be done automatically if the Switch is connected to the net when the update becomes available. Even if you do not want to update right away, it is recommended to enable it.

By pressing the '+' button on the screen for selecting software, the software can be updated manually.

Possible To Prepare The Version

If there is someone that has already done the update, you can perform a version update with someone nearby, even if there is no internet environment.

What To Do When Unable To Update

Of course, you cannot update unless the switch is connected to the internet. First, check if the internet connection is off or in flight mode.

If the update is not possible, there might be a problem with the Nintendo server. Check for the announcement on the official Twitter and official Nintendo website.

Even if the update time has been announced, the update will not always be available. Depending on how the server is crowded and the region where you live, there will be some delays due to user influx so make an attempt again after a while.

If the software has not updated at all, it is also effective to reboot the device. Press and hold the power button then select Power Options > Reboot.