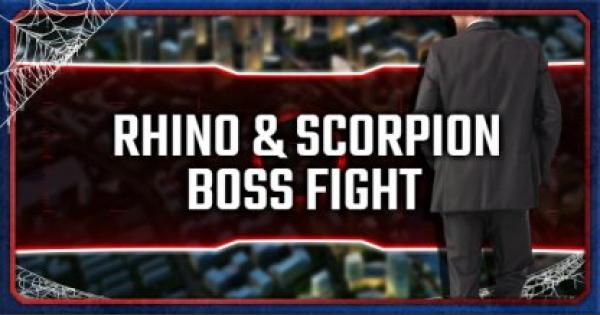 In this boss fight, Spider-Man needs to use environmental objects to create openings when facing Rhino while dealing with the poison attacks of Scorpion.

Lead Rhino To Yellow Outlines On The Ground

Around the cargo yard there are yellow outlines on the ground to indicate where the crane hooks & objects are. Lead Rhino to this area so you can pull the objects/hooks onto him to stagger him.

Crane Hooks & Crane Objects Can Only Be Used Once

Keep in mind that crane hooks & crane objects can only be used once before they are destroyed. Check the area & look up constantly for remaining objects you can use against Rhino.

Phase 2: Taking Down Both Scorpion & Rhino

Web Scorpion To Bring Him To The Ground

Scorpion will make his way on top of the cargo containers to spit acid & poison down on you when you're not looking. Locate him & halt his movements using webs and proceed to beat him up.

Dodge Away From Scorpion's Poison Attacks

Scorpion's acid/poison attacks deal heavy damage so dodge away from them & try not to get hit.

Take Down Scorpion First Before Dealing With Rhino

Scorpion deals heavy & annoying attacks that are hard to dodge when trying to avoid Rhino. It takes little to eliminate him so focus damage first on Scorpion before dealing with Rhino.