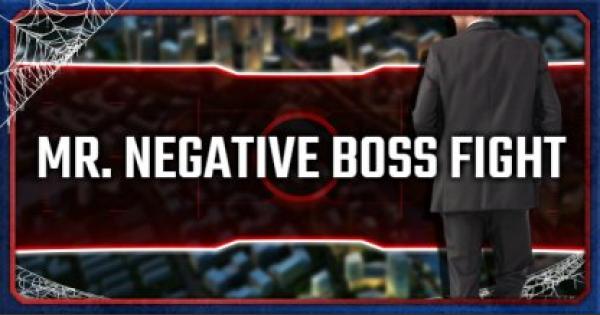 Spider-Man will face off with Mr. Negative inside several train cars. Mr. Negative will deal both melee & ranged attacks that Spider-Man has to dodge, then look for openings to attack.

Use Spider Sense To Dodge Then Attack

Take note of your tingling Spider Sense to know when to dodge Mr. Negative's moves. This prevents taking damage & gives you enough time to counterattack and do some damage of your own.

Phase 2: Dodge According To Attack Direction

Side-Dodge When He Charges Attack With 1 Hand

When Mr. Negative is charging a vertical attack with just 1 hand, dodge to the side by using your L-joystick plus "O" button.

Jump To Ceiling When Charging Attack With 2 Hands

Press "X" and jump to the ceiling when Mr. Negative is charging a horizontal attack with both his hands.

Wait Til Mr. Negative Tires Out Before Attacking

After sending out a series of strikes, Mr. Negative will tire himself out. Use your "△" button to Web Strike and attack him when he's vulnerable.

After dodging his attacks, Mr. Negative will charge up a seemingly powerful move and a "△" button prompt will appear in your screen. Press the button to Web Strike him to negate this move.