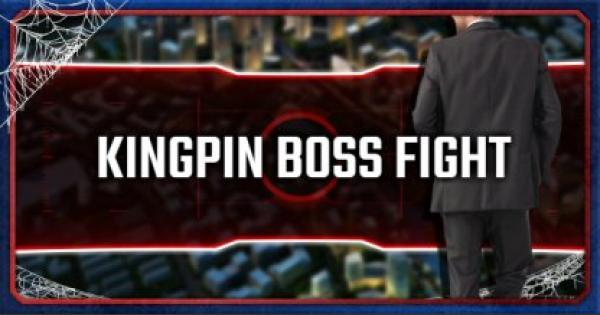 Read this Spider-Man PS4 guide & walkthrough on the Kingpin Boss Fight - boss moves, tips & tricks to beat him, and more!

Kingpin deals heavy damage with his punches. He focuses on melee attacks & doesn't have any ranged techniques.

Wait For Turrets To Stop Firing

The turrets will stop firing for a moment after unleashing a long round of bullets. Dodge the bullets & wait for these intervals before webbing them up & throwing them onto Kingpin's wall.

Phase2: One On One Fight With Kingpin

Hit Him 3-4 Times Then Dodge His Counterattack

After webbing Kingpin up, you can only hit him for 3-4 times with melee attacks before he counters with a punch of his own. Dodge away from this to avoid taking damage.

Kingpin deals heavy damage with his charge & punch attacks. Dodge away from them & keep your distance until you can web him up or make him vulnerable.

Phase 3: Facing Kingpin With His Goons

Try to whittle down the number of enemies you have to fight by eliminating Kingpin's reinforcements first. This prevents getting overpowered by the number of foes.

Shoot webs onto Kingpin to stall him a moment for you to be able to take care of the smaller mobs. This lessens the number of foes you have to face & you can focus on damaging Kingpin later on.