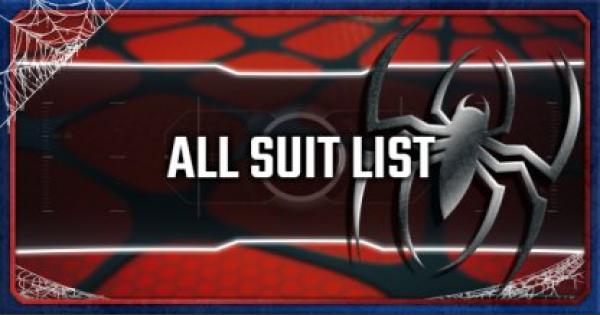 Check this Spider-Man for PS4 list of all suits, suit powers, and recommended & best suits to unlock first!

You obtain the skill "Web Blossom" when you craft the Classic Suit. This skill shoots out massive amounts of web to render enemies vulnerable, great for crowd control.

The Stark Suit comes with a suit power called the "Spider-Bro". It's a drone firing high-voltage taser shots that hovers around your immediate vicinity, electrocuting enemies and taking them out.

The Secret War Suit gives you the suit power "Arms Race". This power temporarily disables all enemy weapons in your vicinity while and stunning them, opening a breathing space.

Crafting the Last Stand Suit grants you the "Unrelenting Fury" suit power. Enemies will not be able to block any of your attacks, even if they're carrying shields, when the Suit Power is active.

Spider-Man's suits are costumes in-game that change Peter Parker's appearance & unlocks skills that you can activate while in combat.

Spider-Man's suits can be equipped with up to 3 Suit Mods to enhance their performance. From improving damage resistance to getting bonus XPs, make sure to equip them before your adventures!

Check Out All Unlockable Suit Mods

You must craft suits to unlock specific Suit Powers. Once you've unlocked a Suit Power, it remains in your arsenal and can be equipped with any suit, as long as you have already crafted the suit.

Suit Itself Is Purely Cosmetic

Suits themselves only unlock Suit Powers, which can be equipped with any suit. They are mainly used to change Spider-Man's appearance in-game.