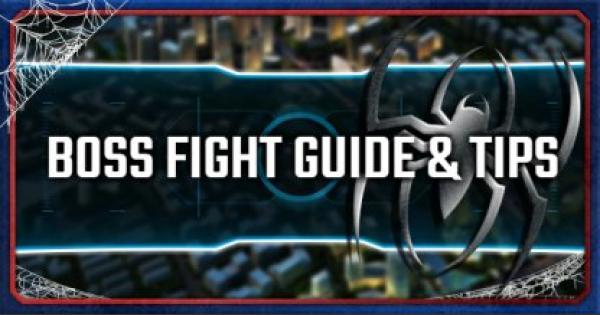 How to Beat Kingpin

Bring the fight to a one-on-one between you and Kingpin by taking out the henchmen first. This will let you focus on Kingpin without having to worry about the henchmen taking potshots at you.

Use Air Combat to Prevent Being Ganged Up On

Use Your Web Shooters to Stop Kingpin's Movements

Immobilize Kingpin with your web shooters to keep him from attacking you. From a bit of distance, rapidly press your "R1" button then zip and attack him by tapping "△".

How to Beat Shocker

Use X while Swinging to Accelerate

Move faster by pressing the "X" button at the height of your swing during the chase. You will catch up to shocker faster using this!

Rounding buildings can be awkward and maybe even cost you some time during the chase sequence. Smoothly go around building corners by holding the "◯" button while turning.

Focus on Avoiding Shocker's Attacks while the Barrier is Up

Don't bother doing attacks while Shocker's barrier is active because it won't work. Focus your time on surviving through his attacks until there's opening for you to attack him.

Throw Items to Shocker to Damage Him

The barrier will eventually disappear for a while, giving you an opportunity to attack Shocker. Throw items at him or attack him with the "☐" whenever his barrier is down.

How to Beat Electro & Vulture

Focus on Electro First to Make the Battle Easier

Electro will keep throwing electric attacks and will become meddlesome throughout the fight. Deal with him first by attacking the electric web until the transducer in the building gives out.

Throw Vulture's Wing Chips Back at Him

Vulture is easier to manage since you will get a prompt whenever he approaches. Turn his attacks against him by throwing back at him his Wing Chips!

How to Beat Scorpion & Rhino

Use your Web Shooter to Get to Scorpion

Scorpion will move away whenever you try to approach him. Use your web shooters to stop him from escaping then attack!

Throw Items at Rhino to Defeat Him

Rhino cannot be stopped with your web shooters. Defeat him by throwing items and obstacles at him, while also avoiding his rush attacks.

How to Beat Mr. Negative

Shockwaves are Based on Mr. Negative's Hands

Know how to dodge the shockwaves based on how Mr. Negative throws them. Swinging with his right hand would mean a vertical shockwave, while both his hands would mean a horizontal shockwave.

Throw an Obstacle Against the Demon Projection

Bring Mr. Negative's Demon Projection down by throwing different items and obstacles at it. There's a lot you can throw in that area so don't worry about running out.

Avoid the Arm Sweep by Going Up in the Air

The demon projection's arm sweep will get you if you try to escape it on the floor. Jump up and get into the air to save yourself from the attack!

The henchmen can easily be taken care without having to use the Finisher Move. Instead, save up your focus on healing in case you get hit by the demon projection's attacks.

How to Beat Doc Ock

Shoot Web while Avoiding the Arms

Create a rhythm between avoiding Doc Ock's arms and shooting him with your web. Recklessly attacking him could easily get you beaten.

Fight in the Air once Otto Climbs the Building

Take the fight into the air by using the pillar on the outer wall of the building. You must also throw objects at Otto to defeat him for this stage.

Avoid his Arms and Counter Attack

Your gadgets will be locked out of this stage so you can't use them. Avoid attacks when your spider sense shows up and attack Otto. Repeat this and you will win the fight!

How to Beat Tombstone

Use Web-shooter to Stall Tombstone While Fighting Henchmen

During your first phase, you will need to take down his henchmen before taking on his second phase. Be warned, these henchmen can turn temporarily semi-invulnerable.

In the second phase of his fight, Tombstone will start using flaming chain as his weapon. This will vastly increase his reach and will attack twice in succession.

How to Beat Taskmaster

Taskmaster will be able to repel most of your attacks including Web-shooters and Gadgets. Web-throw objects or Perfect Dodge into counters to break his guard.

Taskmaster will be able to mimic your every move, including your Finishers. Be warned, these finishers are unblockable and will deal heavy damage.