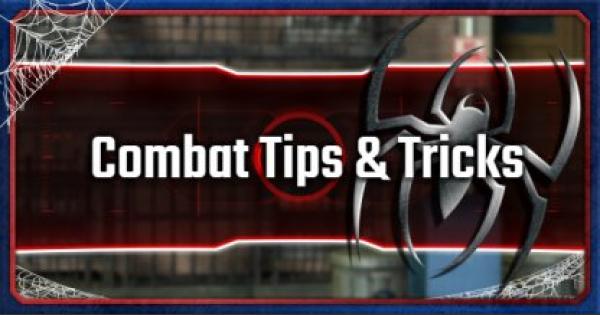 Learn how to do attack combos, perfect dodges, and swing attacks in this combat guide for Spider-Man! Also included are the moves list & tips to improve your combat!

Win Against Fights with These Tips

You have to play smart in order to win fights in Spider-Man. Learning to mix attacks with dodges and creating distance between you and enemies when necessary is essential to winning the game.

Maneuver Around and Prioritize Health

When you're low on health, move away from the battle and heal! Escape for a bit and go back to the fight once you have you health back.

There's a variety of moves you can use in combat in Spider-Man. Mix and match them to make a more dynamic play and to win encounters faster.

Have an Attack for Multiple Enemies

Have a skill that can hit multiple enemies at once in your skill set. This will help you in facing against waves of enemies or as a counter when you're being ganged up on.

Use Your Web to Defeat Downed Enemies

Don't let enemies back up! Hit them with your web to tie them down and get them out of the fight.

Doing a perfect dodge will not only save you from being hit, but will also do a counter attack to your enemy. Time your dodges and use it to get the advantage against enemies.

Be Aware of Enemy Movement

Your Spider Sense is useful, but it will not pinpoint specific enemies attacking you when there are multiple ones. Use your enemy movements, like pulling their arm or weapon back, as indication!

Turn On Your Sounds

With the sound on, you can hear sound indications of incoming attacks. This is very useful when facing against enemies with rocket launchers or mines.

Knowing when to use your web shooters & deliver web attacks will allow you to eliminate enemies quickly & control hordes of incoming foes.

Web Enemies Near Surfaces To Finish Them Off

You can immediately get a single opponent out of combat by webbing them up near a flat surface. Enemies will stick to that surface & will stay there for the rest of the fight.

Fling Webbed Enemies To Surfaces Get Them Out Of Combat

If an enemy has been webbed up, you can pull & fling them to a flat surface, they'll stick to it and won't return to combat.

Throw Grenade Back At Enemies

Some enemies throw stun grenades or small bombs onto the floor near you. Follow the L1 + R1 prompt to pick them up & throw them back.

Throw Off Enemies In Rooftop Fights

There are times that Spider-Man will be picking fights on rooftops. Try to throw enemies off of buildings as much as you can to eliminate them quickly.

Use Concussive Blast Gadget When Surrounded

Use your Concussive Blast gadget to create a pulse wave that knocks enemies back. This allows you to throw them off of the building's edge, effectively removing them from battle.

Moves That Take Out Specific Enemies

Spider-Man will encounter various types of enemies in his adventures. Some specific moves are needed to take out enemies armed with certain weapons or equipment.

For enemies armed with a crowbar or baton, press and hold your attack button to launch them into the air. This makes them vulnerable & gives you an opening to attack.

Get Behind Shielded Enemies

If you're going against an enemy with a shield, it's best to get behind them. Web strike towards them then dodge to create a window so you can hit them.

Brutes are hard to knock down with simple melee attacks. Web shoot them until they're disoriented & then unleash a flurry of attacks on them.

Pull Down Sniper Towers To Eliminate Them

Snipers can do heavy damage if their shots land so take them down by pulling the stakeout tower out from under their feet. You can also use this tower and fling it around to damage other enemies.

Web Up Aerial Enemies & Pull Them Onto The Floor

When facing jet-packed powered enemies, it's best to web them up & pull them down. They'll get stuck to the floor & won't be getting back up.

Perfect Dodge Away From RPG Missiles

Some enemies will shoot rocket launcher missiles at you. These deliver heavy attack damage on you so try to do a perfect dodge & then web strike towards them to take them out.

Learn the Controls for Combat