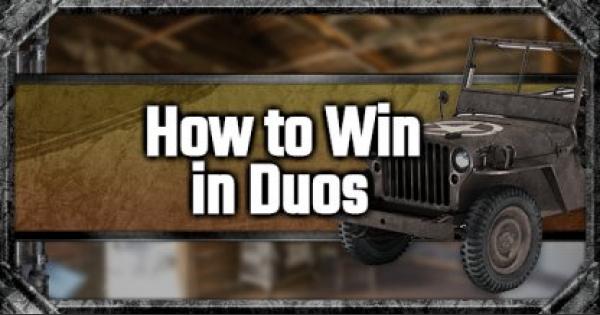 PUBG Mobile
How to Win in Duos

Chicken Dinners are great in pairs! This guide will help you to win in Duos in PUBG Mobile with tips and tricks to survive from early to mid-end game!

Essential Tips to Win in Duos

Communicating with your teammate is very important when playing in Duos. Use your voice chats and map markers to frequently update your teammate on what's happening and where to go next!

Look out for your teammate always. Don't go off on your own and leave each other behind as you could easily be outpowered by other teams on your own.

Use your numbers to your benefit; when engaging enemies, coordinate with your teammate to focus fire and pick enemies off one at a time. The less guns you have pointed at you, the better your chances of survival!

When the enemy you took down is "Knocked-down", it means their teammate is still alive. Don't let your guard down and secure your perimeter first!

Land Further Away For Less Competition

It is recommended to try to land in a place further away from the Plane's route to secure a safe landing zone. Try to look for rural areas with several buildings!

Stick Together When Landing for Safety

Being swarmed with enemies shortly after landing is the last thing you want when playing in Duos. Stick together with your teammate for safety and cover each other's back!

You can tap on your teammate while skydiving to follow their movements. Use this "Follow Teammate" function to land in the vicinity of your teammate!

Look Out for Enemies while Landing

Scope out any enemies landing in the same area while you're gliding down. Call out to your team their general direction and prepare for combat as soon as you land.

Your first priority once you've landed is to equip yourselves with weapons and equipment. This will dictate your survival in the first part of the game!

Don't hog all the good equipment to yourself! Share loot with your ally to raise the chances of his and your team's overall survival.

Plan your Route before Moving

It's a bad idea to travel aimlessly in PUBG Mobile as you can easily be caught by the Blue Zone. Plan out your route with your teammate and check which is the best way to go!

Use Vehicles to Travel Faster

Utilize the different vehicles around to get to the Safe Zone faster. Just note that vehicles are loud and can catch enemy attention easily.

Get that Chicken Dinner with these tips to surviving in the mid- to late-game!

Focus Your Fire to Pick Off Enemies

Coordinate with your teammate to focus your team's attack on a single target. Incapacitating an enemy will hinder the total number of guns shooting at you and will greatly increase your chance of winning.

Make Sure It's Safe Before Reviving Allies

When your teammate is knocked-down, do not rush to their aid immediately. Make sure it's safe first and that all enemies have been dealt with before reviving them.

Don't waste your bullets on a downed enemy. If you kill their remaining ally, they will both get eliminated immediately!