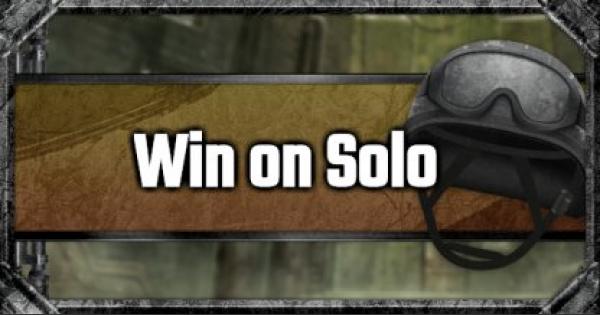 Learn how to win in Solo mode with our detailed guide! Included are tips and tricks for planning your jump and key points to know throughout your game!

3 Tips on Winning Your Solo Match

Tip 1: Arrange Your Loadouts for Versatility

Since you will be alone in Solo mode, you will need to be equipped for every occasion. Prioritize equipping yourself thoroughly with versatile guns like Assault Rifles.

Positioning is especially important in Solo mode, mainly to scan for threats & kill opportunities. Plan ahead and move from one position to the next.

Only engage enemies when you are certain you can confirm a kill. Be opportunistic and try to catch enemies in a crossfire or ambush them after they come out from a fight.

Decide Your Game Plan Before Jumping

Land Further Off When Prioritizing Survival

Land In Nearby Hot-zones When Playing Aggressively

When prioritizing eliminating your enemies, drop to named areas near the Plane's route. Be sure to equip yourself as fast as you can, as there will be high chance of engagements.

Knowing what to do after jumping from the Plane, looting and making your first move towards the Safe Zone is key in surviving early game. Keep these points in check to better your chance to survive!

Prioritize Equipping Yourself in Early Game

Looting for guns and equipment thoroughly early on in the game will directly affect your survivability in mid to late game. Use your time amply and focus on gathering your equipments first rather than rushing towards the Safe Zone.

The Assault Rifle will be your best friend when playing Solo mode due to its effectiveness in any range. Prioritize finding this weapon type first.

Head for High Ground Near Edge of Safe Zones

When traveling, try to head for high grounds at the edge of the Safe Zone circle. This position will be perfect for reconnaissance and planning your next move.

Being in Danger Zone in Early Game is Okay

The damage you take from the Damage Zone early on in the game is minuscule. Try to prioritize getting to beneficial position or avoiding danger over taking small damage.

After the survivor population drops around half of the original players, you will need to start planning and preparing for the final reach to win your Chicken Dinner.

Move From Advantageous Position to Another

Positioning yourself in an advantageous position will help identifying your threat early and give you a rough idea where your enemies will appear. Plan ahead and move from one position to another.

Exploit the Map For Situational Awareness

The Mini Map will provide valuable visual hints from enemy footsteps to gunshots. Always keep an eye on the Mini Map for suspicious movements!

Be Opportunistic When Engaging Enemy

Be opportunistic when engaging an enemy and try to catch them in a crossfire. Ambushing them after they come out from a fight will boost your chance of winning that gun fight!

Check Out How to Improve Aim

Don't Prioritize Going to the Center of Circle

Being in the dead center of the circle may seem safe, however enemies will be coming towards you from multiple angles. Try to stay near the edge of the Safe Zone circle to limit the number of engagements.