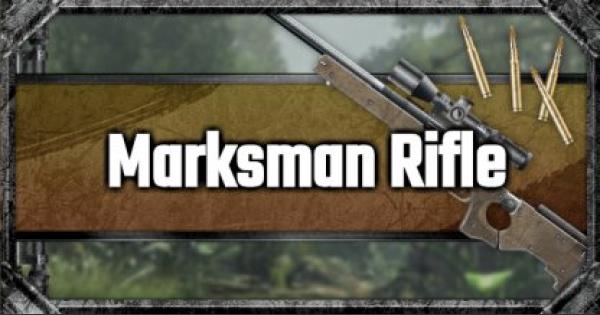 Compare the stats & general application in this comprehensible weapon list for all Marksman Rifles available in PUBG Mobile.

*Each Column dictates the Magazine Capacity, Damage Output, Recoil, Maximum Range, and Rate of Fire out of maximum of 100 in that specific order.

A Combination of Assault Rifles and Sniper Rifles

The Marksman Rifles combines some of the best traits of Assault Rifles and Sniper Rifles and balances it out with some drawbacks, such as high recoil and significant bullet drops.

Fire in Bursts to Suppress Recoil

High recoil is a problem among most Marksman Rifles. Compensate for this by firing in short bursts to control the fire and be more accurate in the shots.

Marksman Rifles are capable of not only being effective in long-range, but in mid-range as well. These weapons have a shorter range than rifles, but comes with bigger magazines and higher fire rate.

Use in Mid-Range Where It's More Effective

The sweet spot of Marksman Rifles is in the mid-range. Here you can utilize it's high fire rate and suppresive power.

Fires 7.62mm rounds. Single shots deal very high damage and can be equipped with a variety of attachments. But it has a heavy recoil and is harder to control when firing continuously.

Check Out the SKS Stats & Overview

Difficult for Long-Range Due to High Bullet Drop

Fires 9mm rounds and comes with a suppressor and a 4x scope. Light recoil but also less powerful. Difficult to hit moving targets that are far away due to initial speed and high bullet drop.

Check Out the VSS Stats & Overview

Fires 5.56mm rounds with high initial speed and low bullet drop. Has the largest magazine of all sniper rifles. Stable but easily spotted due to the firing sound.

Check Out the Mini14 Stats & Overview

Obtained from air drops. Fires 7.62mm rounds and has high single shot damage. Light recoil when firing while prone with stand, but heavy recoil when in full auto mode.

Check Out the Mk14 Stats & Overview

Semi-Automatic Rifle, but with High Recoil