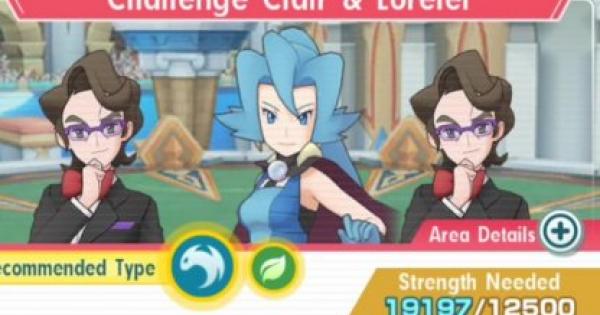 Lorelei and her team are weak to Grass type attacks. Bring grass type attackers for best effect. Sync pairs that can target Clair's Dragon weakness are hard to find, so don't sweat it.

Things To Watch For & Focus On

Lorelei may cause Lessen Abilities that will greatly lower the duration & effects of Debuffs. Clair will lower her own damage after using her Draco Meteor attack, but will remove all bad status effects with her Victory is Mine! move.

Best Sync Pairs To Use Vs. Clair & Lorelei

Check Out All Sync Pairs Here

Clair & Lorelei has many hard hitting attacks. Skyla's Potion move will be handy for your ally's Striker when they're badly wounded, and her Take Flight! will increase Def, Speed for the whole team.

Damage may vary with level & stats

Lorelei's Blizzard is wide attack that deals a lot of damage and can one-shot many Strikers. Eliminate her first, or swap out your Strikers for Support who has better chance of surviving this move to protect them.

Victory is Mine! Removes Bad Stats And Increase Crit

Clair's damaging Draco Meteor will lower her Atk, but her Victory is Mine! will remove all her bad stats as well as granting her extra crit. This also means that she will recover from stat penalty attacks much quicker.

Check Out All Moves Here

Mobs in this fight isn't much of a threat, so focus your firepower in bringing down Lorelei first due to her fearsome Blizzard move.

Debuffs are ineffective against bosses due to their Lessen Abilities that will greatly lower the duration & effects of Debuffs. Also, Claire will use her Victory is Mine! move to remove all bad status effects on her. Brute force may be the only effective way in dealing with Clair.