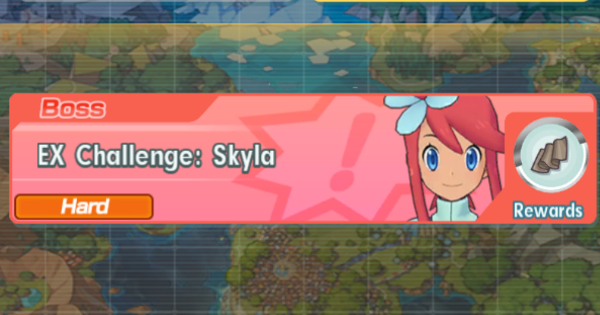 Face Off With Flying & Ghost Pokemon

Flying and Ghost combinations of opponents in this stage! While strikes of Hex at sides are powerful, sync move of Skyla's Swanna is must-avoid. Bring strong Rock & Ghost Pokemons to win!

Things To Watch For & Focus On

Opponents use skill to strengthen Critical-Hit Rate, Sp. Def Up, Defense Up in this stage. Watch out and strategize to overwhelm them!

Use Critical-Hit Rate Up Skills Against Opponents

Opponents use defense buffs and after they are effective, it is hard to deal massive damage to Opponents. Use pokemons that has critical-hit up to penetrate your strikes.

Best Sync Pairs To Use Vs. Skyla

Get Skyla Down First With Olivia & Lycanroc

It's super difficult to win the fight if Skyla uses Sync Move as it's so deadly. Get her down before it happens.

Support Of Phoebe & Dusclops Is Helpful

While passive skill "Vigilance" makes the critical-hits as normal hits , "Unbreakable Bonds!" helps to raise offence power as a team. These supports are very helpful.

"High-Flying Sky Attack" is a Sync Move of Skyla. Don't let her activate this move, which is the key of this stage.

"Aerial Ace" never misses and it comes even stronger with Critical Attack.

Skyla launches her Sync Move destroys your team badly. To strategically win, let Skyla down before she launches it.

Damaged by critical-hits in this stage means almost lose. Use Dusclops's Passive Skill to increase suitability.

This looks like it was written by a 12 year old. No useful information at all. Trash article. Next please.

This is really badly written. The author doesn't even understand the mechanics of the game fully. You can't Hypnotize Swanna, nor can Kris survive Swanna's sync with her p***ive.