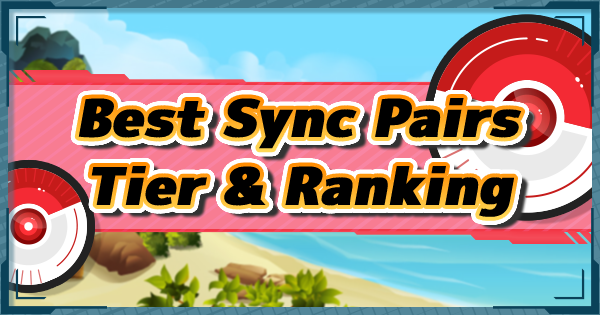 In Pokemon Masters, having the best Sync Pairs in your team is a must. Find out which Sync Pairs you should have and why using this list!

※Click the Sync Pair icon for the explanation

Lycanroc can use "Rock Throw" an attack that deals moderate damage and consumes only one Move Gauge. If used in tandem with X Attack, you'll be seeing your enemies HP drain down like there's no tomorrow.

Lycanroc can learn a move called "Stone Edge" which allows it to deal criticals easily. The chance to deal a lot of damage is high but be mindful as there is a larger than normal chance for the attack to miss.

Pinsir's "Fury Cutter" grows stronger in damage for every consecutive hit. It only consumes 1 Move Gauge, thereby allowing it to be used quickly.

With X-Attack, Pinsir's Attack can be buffed to level 2. Using this in tandem with "Fury Cutter" results in a large amout of damage for the opponent. It is recommended to use X-Attack at the start of a battle to fully maximize it.

Using Waterfall has a small chance of making the target flinch. Flinch prevents the afflicted from moving and doing anything, making the battle easier and more manageable.

Totodile can learn a very strong normal attack called "Mega Kick". If a passive skill is learned, Mega Kick can be transformed into a Water attack, allowing Totodile to deal far greater damage to targets weak to Water types

For Strike Sync Pairs, having a high Attack & Sp. Atk is essential. Having a high number for both of these stats translate into a greater amount of damage. The higher the innate stats of the Sync Pair, the higher their place in the rankings.

Each Strike Sync Pair's Move Set is different. Synergy is also important between these skills and moves. Move Sets that contain attacks and passives that compliment each other results in a greater chance of survival or winning the battle.

Air Cutter targets all opponents and lands critical hits easier. Special attack is one of the best among special attack sync pairs.

Treecko's Sp. Atk is already phenomenal in its own right but if coupled with the learnable skill, Leaf Storm, almost nothing can stand in its path. Be careful in using it though as Treecko will have a lower Sp. Atk after using this move.

Out of all Sync Pairs in the game, Karen and Houndoom's stats are the highest, making this Sync Pair one of the best Strikers in the game.

Can Attack The Whole Enemy Team

Snarl is an attack that hits all opponents. But the thing that makes this move special is that it also lowers the defender's Sp. Atk. This in turn lowers their offensive power greatly, enabling you to continue damaging them and keeping them at bay with Snarl.

This Sync Pair comes with pretty good dragon attacks that deal a decent amount of damage. "Dragon Breath" has a chance of leaving enemies paralyzed and "Draco Meteor" hits all opponents with a powered attack. Be wary with using "Draco Meteor" though as it lowers Kingdra's Attack by 2 levels.

Using this Trainer Move increases Kingdra's Attack by 2 levels. Recommended to be used during the early stages of a battle to maximize every attack.

Discharge can target all opponents and can deal high damage.

Can Fill The Move Gauge Faster

The passive skill of this Sync Pair helps the whole team take advantage of a sunny weather. Use this passive ability efficiently by teaming up with Arcanine and/or Ponyta.

For Strike Sync Pairs, having a high Attack & Sp. Atk is essential. Having a high number for both of these stats translate into a greater amount of damage. The higher the innate stats of the Sync Pair, the higher their place in the rankings.

Each Strike Sync Pair's Move Set is different. Synergy is also important between these skills and moves. Move Sets that contain attacks and passives that compliment each other results in a greater chance of survival or winning the battle.

Can Freeze The Whole Team

Both of Lapras' moves can induce freeze targets, disabling their movements. This goes well with this Sync Pair's passive skill that raises the chance of inflicting status effects of attacks.

Lapras can use "Blizzard", a move that can freeze enemies and does a large amount of damage. On its own, it has a large chance of missing due to its low accuracy, but during if used during a hailstorm, the move is a sure-hit. Partner this Sync Pair with Abomasnow to call for a hailstorm.

Has A Sure Paralysis Move

This Sync Pair has a move called "Nuzzle" that inflicts paralysis on its target 100% of the time. When fighting an enemy above your level, be sure to bring this guy along to make the battle more manageable.

Togedemaru can use "Zing Zap" to flinch enemies. While it can only induce flinch with a moderate amount of chance, this move also does a decent amount and can be used efficiently to support other members of the team.

A & B Tier Tech Sync Pairs

For Techs, having moves that induce status ailments to their targets is important. Techs that have moves that restrict enemy movement like paralysis and sleep, occupy a higher place in the tier.

Techs are also required to do battle and having good innate stats is important. Sync Pairs that have better stats are ranked higher.

Can Raise Critical-Hit Of Allies

Phoebe and Dusclops come with the Trainer Move, "Dire Hit All", allowing them to greatly increase the critical rates of all allies. This skill alone makes this Sync Pair a must-have in every line-up.

This Sync Pair can also raise all allies' Attack through "Unbreakable Bonds!". If used together with "Dire Hit All", it is possible for the whole team to deal enormous damage with every attack.

Rosa and Snivy can greatly increase the offensive power of the whole team through "X Sp. Atk All". In a team composed of 2 attackers, this skill is indispensable.

Despite Rosa being a ★5 level Sync Pair, you can get her early on in the game. Use this Sync Pair's formidable support to progress further in the game!

Potion can heal your teammates. With Take Flight!, Skyla has great support skills.

Lyra & Chikorita has a support skill to boost all of Sp Atk, Stk and speed and they are effective for your entire team, which makes her compatible with many others to build a team. Also, when weather is sunny, Sunny Side Up! is more effective, it is nice to go with Blaine & Ponyta.

High HP & Can Role As Tank

Lyra & Chikorita has one of the best HP among all sync pairs. Light Screen can reduce damage from sp. atk and she is strong against sp. strikers.

A & B Tier Support Sync Pairs

Within the Support Role are many types. There are some that heal, remove statuses, and some that buff teammates. The ranking is based on the buffs that the supports can give, Supports with moves that increase an ally's critical or speed get a higher place in the tiers.

Supports can also deal and take damage in battle. Each Support Sync Pair's stats, more specifically the Defense and Sp. Def., plays an important role as those stats increase the Sync Pairs chances of survival. The higher those stats, the better.

why is Brycen & Cryogonal not on the best support? he was very good at mewtwo event?

Hmmm :) it's interesting I gotta say.

How about Liza & Lunatone? She's really good support IMO, raising atk and sp atk, x sp def all, and also psychic can help lower the enemy's sp def. She should be at a conditonal A tier or at least B tier...