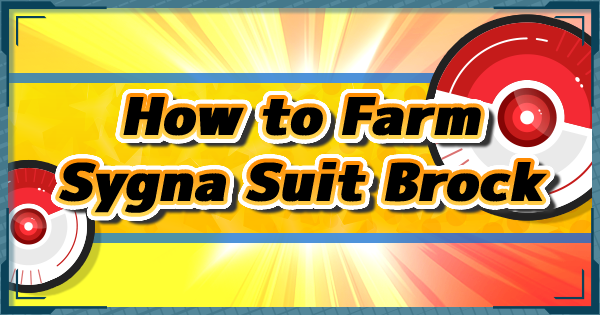 Currently this mission is the go-to farming spot for any player looking to farm Gym Leader Notes, thanks to its relatively low requirements, and accessibility. Due to this, this mission is among the most popular match to play in Multiplayer.

Should Be Played in Hard Difficulty

As of now, we are have only confirmed drops of Gym Leader Notes from Hard difficulty in this mission. Be sure to select the appropriate challenge before entering Multiplayer!

Available as a Multiplayer Co-op Battle

Note that this vs. Sygna Suit Brock battle mentioned in this guide is specifically a Multiplayer Battle. In order to challenge, you will first need to unlock the Multiplayer battle by completing Chapter 10 of the story.

Check Out How to Unlock Multiplayer

Check Out More About Korrina & Lucario!

Lucario's unlockable move "Close Combat" excels in extremely high damage per shot, and will be highly effective when using against Brock's Tyranitar. Using him as a damage dealer in this battle is highly recommended!

Guaranteed to be Acquired Through Story Quest

Korrina & Lucario pair can be automatically recruited through in Chapter 6 without having to farm for Sync Pair Scouts. Due to their accessibility, they are highly popular Pair to be used in this grind.

Find Out More About Bruno & Machamp!

Coupled with high Attack stats and moveset focusing on delivering Criticals, Bruno & Machamp is extremely lethal when it comes to delivering high amount of damage within a short time.

Self-Buff to Amp Up Crit Chance

Bruno can use his trainer move to sharply rise Machamp's Crit Chance, and make quick work of Tyranitar in combination with the Cross Chop.

Find Out More About Marshal & Conkedurr!

Marshal & Conkeldurr have a high survival rate due to their skill that allows them to recover health by absorbing damage. This makes them great to tank through damage.

Conkeldurr deals double damage against Tyranitar being a Fighting type. Take advantage of this and focus all his attacks to Tyranitar throughout the battle.

Level 75 and Above Recommended

It is recommended to have your Sync Pair to at least Level 75 before challenging this fight. Although not mandatory, the lack of stats and levels will hinder your entire team's chance of winning drastically. Remember, this is a multiplayer co-op battle!

When your Pair is just around Level 75, it would be more effective to focus all your fire on Tyranitar to take down the main damage dealer as quickly as possible.

Deal with the 2 Nosepasses for Quicker Runs

If you are over-levelled, your grind may be sped up by dealing with the 2 Nosepass first. After dealing with Nosepass, focus fire on Boldore to drag the 2nd wave of Pokemons (along with Brock & Tyranitar) to the field.

Finish the last 3 enemies off with your Fighting Unity Attack to wipe out the group. If the Tyranitar survives, continue to deal damage