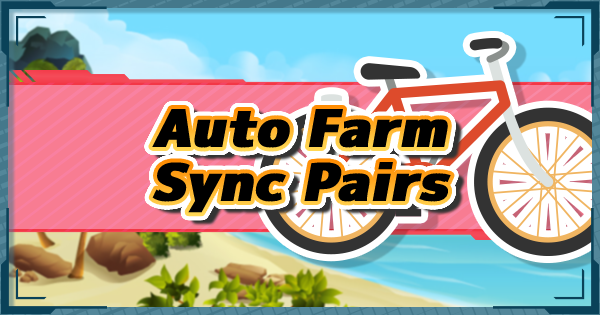 Check out which Sync Pairs are best for Auto Play Farming in Pokemon Masters! This includes what Auto Farming is and what you get from it.

Barry & Piplup are a good Striker for farming since their Bubble move can hit all 3 opponents at once. Rosa's Special Attack boost will amp up his damage further.

Barry & Rosa are Available in Story

This team is easy to build since both Barry and Rosa can be recruited fairly early into the Main Story. Phoebe is harder to get, but you can use alternatives for her.

Replace Phoebe with Another Support

Grant & Amaura's 3-move gauge Rock Slide move is extremely power. It's hard to use initially, but with Marley's buffs, it can be used in short intervals.

Liza & Lunatone can further boost the damage done by Grant & Amaura's attacks with their Raise Attack skill. This will make Rock Slide even more powerful.

If you don't have Marley yet, you can opt to use another Support with focus on raising Speed. Roxanne is a good substitute for her.

What is Auto Farming?

Auto Farming is basically using the Auto Battle feature to continuously complete battles for their rewards. This is best use in Training Course to get XP and materials in every run.

While Auto Faming, you don't only get Rewards, you also get coins and XP. Keep doing them and your Sync Pairs are sure to level up while Auto Farming.

Check Out How to Power Up Sync Pairs Here

How to Auto Farm

At the start of the battle, toggle on the "Auto" button at the upper right side of the screen. This will enable Auto Battle! You can also change the settings through the Gear Icon to the left of the screen.

Use a Strong Team to Win Battles

Since you won't have any control over the actions during Auto Battle, your normal strategies won't be in effect. Use a team that is overleveled for that quest to ensure victory.

Check Out How to Level Up Sync Pairs Here

Can Be Done in All Battles

You can Auto Farm any repeatable Battle that you've unlocked. Though it's recommended to do this in Training Courses as the rewards are set.