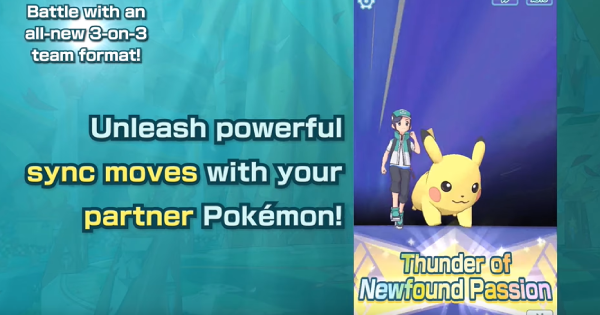 Pokemon Masters
Sync Moves - Guide & How To Use

Check out this guide to learn everything to know Sync Moves! This includes how to get Sync Moves during battles, their effect, tips to use them, and more.

What are Sync Moves?

A Sync Move is the most powerful move a Sync Pair could do on their own. With its high damage, it can easily create turn a battle into your favor when done right.

You won't be able to use a Sync Move immediately during a battle. It takes 9 moves by your team before it becomes available for use.

Sync Move is Shared Between Team

The Sync Move countdown is not per individual Sync Pair. Once you've done 9 moves, you can choose from any of the Sync Pairs to do the Sync Move. Note that only one of them can do it, not all.

Countdown Resets After Use

Upon doing a Sync Move, the countdown will go back up to 9, requiring another 9 moves before you can use it again. During most battles, you'll only be able to use it once so use it wisely!

How to Strengthen Sync Moves

Get Duplicates of the Sync Pair

Getting Duplicates of the same Sync Pair raises the power of your Sync Move. This can go up to 5 levels where the move will be at its strongest.

Check Out What Happens to Duplicate Sync Pairs

How to Get Sync Pairs

The only way you can get duplicates is by playing the Sync Pair Scout. Since its results are random, it's not guaranteed that you'll immediately get the Sync Pair you want. It also includes Sync Pairs you get from the story.

Some Sync Moves Cause Mega Evolution

Some Pokemon evolve into their Mega Evolution when doing their Sync Move. This will cause them to get higher stats throughout the battle!

How to Activate Sync Moves

Take into account your opponent's element weakness and health before using your Sync Move. Always target opponents with higher health & element weakness. Don't waste it on targets who have little health left.

It's not just Pokemon moves that brings down the Sync Move Countdown. Any action by the trainer will be counted towards the Countdown!