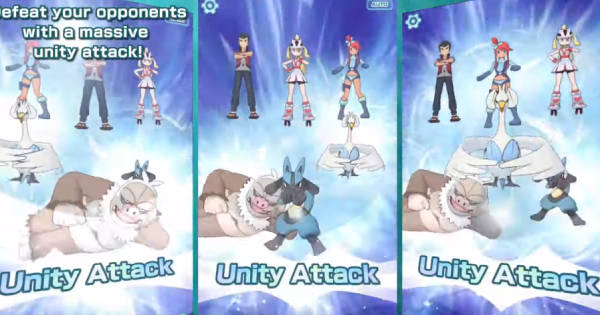 Pokemon Masters
How To Do Unity Attacks

Learn how to do Unity Attacks during Co-Op battles in Pokemon Masters in this guide. This includes when you can do it, its effects, damage, and more!

What is a Unity Attack?

Unity Attacks are extremely powerful attacks done together by all three players in a team. As a combined attack, it deals a whole lot more damage than singular Sync Attacks.

Check Out the Battle System Here

The elemental damage of the Unity Attack is dependent on the Pokemon of each of the Sync Pairs. This means that it can have up to 3 different elements all in one strong attack!

Only Available in Co-Op Battles

Unity Attacks can only be done during Co-Op Battles with other players. You won't get the option to do them in single-player battles.

Check Out How to Play Co-Op Here

How to Do a Unity Attack

Work Together to Fill Up Meter

The Unity Attack is tied to a Meter that is filled when players execute moves. It takes a while to fill, requiring quite a bit of Move Gauge from each player.

Do moves without being interrupted by the enemy and you'll see your Unity Attack Meter fill up faster. This requires cooperation between your team to attack in sync with each other!

Attack Can be Unleashed by Anyone on the Team

Once the Meter is filled, anyone in your team can press the button to do the attack. Remember to communicate between your team and time the attack!