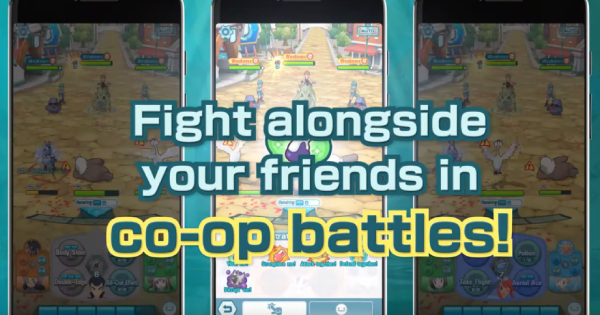 Pokemon Masters
How to Multiplay / Co-Op

Find out everything to know about how to play co-op in Pokemon Masters in this guide! This includes how to multiplay, it's benefits, rewards, & more!

How to Unlock Co-Op / Multiplay

Progress Through the Game

You won't be able to play with your friends immediately after starting your Pokemon Masters. You'll have to further play through the game before you'll get the option for multiplay.

Select Co-Op when Looking for Quests

Pressing Co-Op will filter which battles you can play with Friends. No Co-Op battles will show up if you don't have any friends in Pokemon Masters.

Can Only Co-Op with Friends

Playing Co-Op is only available for players on your Friends List. So far, there's no option to multiplay with random players. Without anyone on your friends list, you won't be able to play Co-Op.

At the Co-Op, you'll be able to invite friends to join you on a battle. You'll also see which friends have already joined your team and the character you're going to use.

What Do You Get from Playing Co-Op?

Team Up with Friends in Battle

Have a hard time defeating an opponent? Bring in your friends to create a 3-player team and fight together. Each player will have control over their trainer, including moves, items use, and more.

Check Out the Battle System Here

Play as a Backup Sync Pair in Co-Op

In Co-Op battles, you won't play as your main character. All three players will have to select a Backup Sync Pair to play as during the battle.

Can Only Co-Op Against Strong Enemies

However, not all battles will allow Co-Op play. It's limited to select battles against powerful enemies.

Unity Attacks can only be done by Co-Op teams. This will have all three players' Pokemon work together to unleash a powerful attack!

Very Hard Co-Op Challenge will be unlocked in the later game and they are super difficult! Through out those very difficult fights, you will be handsomely rewarded gears to power up your team.