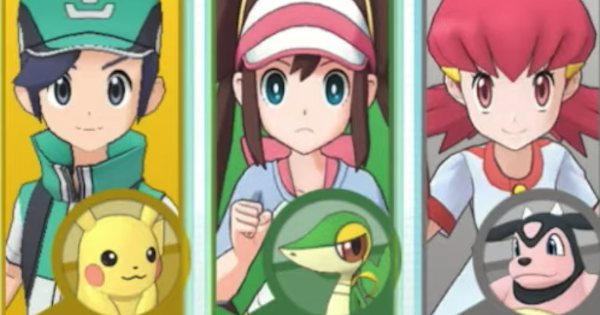 Check out this guide to learn how to create the best team in Pokemon Masters! Includes tips on team composition, recommended team formations based on roles and more.

A formation that focuses on buffing & protecting the only Striker for it to do the job, and can shut down many debuff-oriented enemies. More effective if the Striker can do all opponent damage moves.

May Cram Out Sync Moves Faster

Many Support units have spontaneous buffs. By activating them all at the start of battle, you may be able to pull in more moves and use a Sync Move faster than your opponent. As most buffs can be used only twice, this may be unsustainable for longer battles.

A Striker only formation that excels at blitzing the enemy and ending the battle fast. This team can shut down key enemy units with focus fire quickly, but is helpless when debuffed. Good mainly for speed runs and fast grinding.

A well-balanced team formation. Its Charm lies in that you can both buff and debuff, giving you versatility to deal with most situations. However, you'll lose some damage with only 1 attacker, making battles that require massive burst damage difficult.

Focus On Building A Team Around Roles

Each Sync Pair has a designated role. By combining roles together, you can come up with combo attacks such as nuking the enemy after you weaken them with Tech moves. Be sure to confirm enemy team members before assembling your own team!

Some Sync Pairs will have the ability to improve attacks of their teammates using their trainer skills such as X Sp. Atk All. Make sure that your team is composed of Pokemon with an attack type that matches the Trainer Skill!

Can Be Identified By The Icon

You will be able to identify the Attack Category of a Pokemon's move by checking the move's information in the Sync Pair's profile. There will be an icon displaying what attack category it is.

Every Sync Pair has a attack type they are weak to. Attacking them with that type of attack will deal extra damage. For tough bosses with lots of HP, it's more efficient to assemble a team that can exploit that weakness.

Use Passive Skills In Conjunction With Your Moves

Some passive skills will be activated in certain situations. For example, use Blaine's Sunny Day move to activate Gardenia's Speeding Sun skill and boost your move gauge's recharge rate!