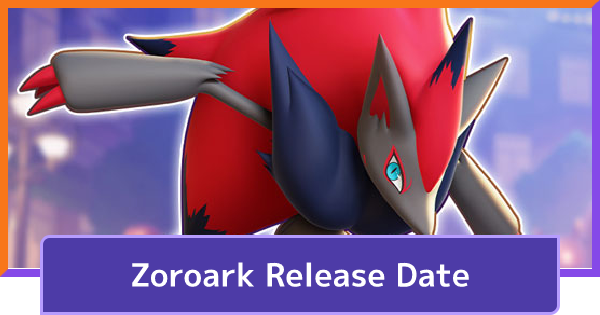 Zoroark release date will be revealed soon! Zoroark is a new character in Pokemon Unite (MOBA) for the Nintendo Switch, Android, & iOS! Learn the time & all info on Zoroark so far!

Zoroark Will Be Coming In Time For Halloween!

The haunt is on as Zoroark is about to join the roster in Unite in time for the upcoming Halloween events! This fox-like Generation V Pokemon blends perfectly in the night with its dark form streaked with red accents. A master of illusion and shadows, Zoroark will becoming on Pokemon Unite this October 27!

Zoroark is almost ready to dance around the competition. Trainers that log in after the update on 12/9 can obtain its UNITE license for free for a limited time!

Don't miss out on adding this powerful All-Rounder to your roster! #PokemonUNITE pic.twitter.com/dIFVxyYkb7

Zoroark May Be A Speedster

It was hinted that Zoroark will be dashing very soon in Unite suggesting that it may possibly come as a Speedster with incredible amount of mobility to use to move around the lanes similarly like Absol.

With Zoroark 's dashing moves, clearing spawns in the central lane should be no problem! Zoroark can farm here during the early stages to unlock its deadly moves before getting in and out of battle in the other lanes.

Illusion is a skill that allows Zoroark to transform into a random wild Pokemon or a Pokemon from the opposing team, making it ideal for hiding in plain sight. You can use this to confuse the enemy and sneak past their defenses!

Zoroark performs a dash attack, followed by a boosted strike that refills the dash attack on hit in Night Slash. When you hit an opponent six times in a row, Zoroark will leap into the air and fall with an AOE slash that restores HP on each hit!

What Kind Of Pokemon Is Zoroark ?

Zoroark 's first appeared as a dark-type 5th Gen Pokemon. Zoroark has a ghost form and debuted as a silhouette before being revealed.

Above is an overview of Zoroark 's evolution based on its previous appearances and history.