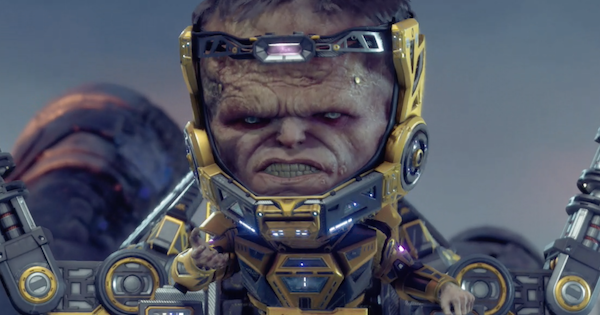 MODOK is the ultimate story mission boss in Marvel's Avengers. Taking him down will unlock new features and end-game content.

MODOK - How To Beat

This boss fight is separated into 3 parts. The first two being a conventional boss fight and the last one being a quick time event against the giant Kree.

As Iron Man, target and take down MODOK's thrusters to proceed to the next phase. MODOK can launch multiple missiles and pull debris to surround himself and damage those around him. Keep your distance and use precise ranged attacks to bring him down.

You assume control of Captain America for the 2nd phase of the fight. Same as with Iron Man, hit the main thrusters directly underneath MODOK to bring him down. Then, hit the generator attached to his back to advance to the next phase. Be careful of his claw attacks as they deal a large amount of damage.

In Phase 3, you take control of Thor against a shielded and heavily defended MODOK. Attack the surrounding enemies to gain charges, then use Bifrost (Ultimate Heroic) and cast it directly on MODOK to end the fight.

You battle with MODOK as Black Widow during part 2 of the boss fight. MODOK utilizes psionic attacks and will rush around the battlefield to damage you. He can also launch missile for ranged attacks. Use ranged attacks to easily reduce MODOK's HP.

Modok has 2 ground wave attacks: one in which he rushes with the attack towards the other side, and the other where he remains immobile. A simple jump is enough to evade both attacks.

MODOK's 2nd phase pits you against the gigantic Kree with MODOK inside. You need to advance the level as Kamala Khan in order to get to the 2nd phase. The 2nd phase is a sequence of button prompts that the player must perform. Correctly doing them brings about the ending of the story campaign.