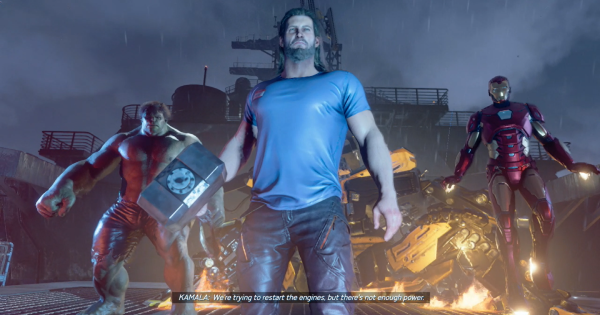 Read this Marvel's Avengers Game 2020 guide for the main story walkthrough of the Hero Mission, Once An Avenger! Learn tips and boss fight tricks to beat this campaign.

Once An Avenger - Walkthrough & Tips

Once An Avenger - Walkthrough Chart

Use Takedowns To Quickly End Foes

When you've dealt enough damage to a foe or have stunned them, a combo move button prompt will appear. Follow the prompt to quickly defeat the enemy.

Kamala will have to face a Cryotronic Exo when Jarvis is under control. Use her skills to enlarge & deal massive damage to the powerful foe in front of you.

Destroy The Lasers In Both Arms

Beating Aegis Dreadbot becomes much easier if you destroy the lasers on the both arm. Aim its arm with ranged attack.

The machines will turn and follow you, spewing fire from its turrets to damage you. Make sure to side-step to avoid taking damage from its fire turrets.

To lessen the Dreadbot's huge life bar, make sure to attack and hit some of its vulnerable weapon parts. Check the glowing red parts on its body to see which ones you can destroy to lower the Dreadbot's HP.

The Dreadbot will do occasional pulse attacks that can damage you. Roll away when you see the red circle and the force field to avoid taking damage.

When the Dreadbot's HP goes down enough, you'll get a prompt to use Thor's Bi-Frost Heroic ability. This will end the battle for this mission.