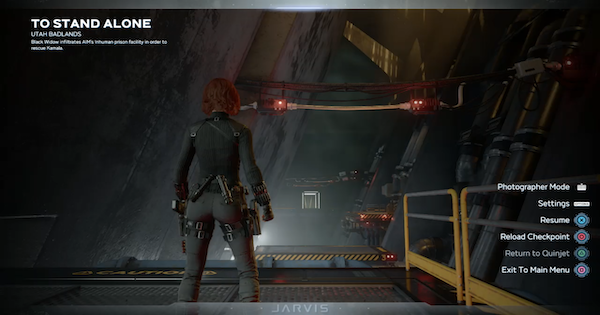 Read this Marvel's Avengers Game 2020 guide for a full story walkthrough for the Hero Mission, To Stand Alone! Learn tips and boss fight tricks to beat this campaign.

There will be some story progress to be made in the opening part of this mission. Find Maddy Cho and talk to her. Then proceed to do the remaining steps as well, which will take you through the facility and have you talk to Bruce.

You'll then be tasked with sneaking out of the Ant Hill. You'll have to do some minor platforming in this section, and it is possible to fall off, so time your jumps carefully.

You'll Get Your First Exotic Gear

Just before you warp to Utah Badlands, you will get your first exotic gear called Sacred Norn Stone of Lethal Will.

Learn How To Get Other Exotic & Legendary Gear Here

Right after you saw AIM's airplane passing overhead, look to your left. Grapple on to the tree branch to jump across and find a golden chest.

In one area of the base you'll come across an enemy called a Stiletto Riotbot. These have a powerful forward charge which you really need to dodge. They will block frontal attacks, so watch its attack carefully and dodge to counter them. Timing will be key here, as if you dodge at the wrong time you'll eat several powerful attacks.

At one point during this fight, the room's decontamination protocol will activate. You'll have to shoot or hit the panels that appear to stop poisonous gas from coming out. Prioritize this while dodging away from enemy attacks.

In this next part you'll take on an Adaptoid. This enemy has a powerful frontal burst laser attack, and can also regenerate its HP! You'll want to focus it down as fast as possible to avoid this happening multiple times.

This next room will have a whole bunch of enemies coming at you at once. They're manageable on their own, but you can easily get combo'd down if you're not careful. Elite Synthoids can knock you down, while Proto Synthoids can shoot ranged attacks at you from the back. Position yourself carefully or take out the Proto Synthoids first to avoid this.

Monica's mech will have a few key abilities you'll need to dodge out of the way. One of them leaves a large red circle indicator on the ground which you should just move away from.

↑ The mech will fire several shots that leave a white smoke behind them. You'll want to take cover behind a box for this ability, or otherwise keep dodging.

Take Out The Drones

In the first "intermission" phase of the fight, Monica will disappear and several drones will fly in to the field. Take them out with your ranged weapon as quickly as possible.

In the final phase, Monica will return to her mech, but now she'll be on fire. She'll begin to use more lumbering, heavy-hitting melee attacks. You'll want to attack after she's finished lunging. Just don't stick around in her melee range for too long, maintain distance and you should have this fight in the bag.