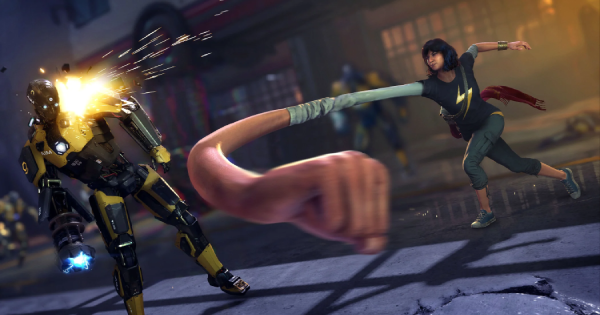 Check out this guide for best builds in Marvel's Avengers Game 2020. Including recommended skills, best gear and gear perks, & more.

This Iron Man build focuses on melee damage first, with Might as its primary stat and most perks geared toward light combo boosts. However, it will also make frequent use of ranged attacks, so some precision is worth having.

With the above skill order, you'll focus on getting useful melee-based attacks first, and then supplementing them with ranged abilities after. Once you hit level 10 you'll want to start getting skills from the Specialty tab, as they offer some useful boosts.

Hulk is a beast of a melee damage dealer who not only packs a punch but has a built-in self sustain in the form of Rage. Focusing on damage and speccing into rage talents first will give you great returns on Hulk early on.

Check Out A Full Hulk Build In Detail Here

Focus on getting Sky Fall and Earth Smasher first so you can stun enemies early on. Afterwards. invest into the Rage tree, working towards a powerful, high-damage Overcharge build later on in the game. When you get Cataclysm at level 15, switch over to get some key Masteries.

Check Out All Hulk's Skills & Abilities From Here

This Black Widow build focuses on using her ranged abilities to supplement your party. Switching between different types of ranged weapons can help you deal with far off pests like turrets and drones, as well as bulkier robots up close. Focus on unlocking all ranged weapons fast and using them frequently. Don't tunnel vision and forget to dodge, however!

Check Out A Full Black Widow Build In Detail Here

You'll want to get Full-Auto shot, followed by its buffs, then High-Caliber shot. This will give you a good variety of ranged weapons to work with. At level 15, start going into masteries and unlocking the best ones there.

Check Out All Black Widow's Skills & Abilities From Here

This Ms. Marvel build focuses on making her both bulky and powerful, with emphasis on HP and regenerative abilities. She'll take on a bruiser-tank role in most parties, while also being able to dish out significant damage.

The above skill order can be used for early-game leveling - you'll want to get some basic damage abilities in while picking up relevant specializations once they open up at level 10. After level 15, you'll gain access to Masteries, which you should prioritize getting.

Check Out All Kamala Khan's Skills & Abilities From Here

Captain America plays well as a ranged attack dealer support who has the ability to buff his party up and deal decent damage/provide stuns.

Check Out A Full Cap Build In Detail Here

The skill order listed above will serve you well for leveling through campaign. Shield Dive and Soldier's Slam are useful for both evasion and knocking down enemies. Afterward, it's worth putting points into your ranged attacks. Eventually at 15, you'll want to go deeper into the Mastery tab.

Thor's strength is high melee power and high stun damage. This build focus on stunning the enemy with melee attacks and using takedowns to finish off enemies.

Check Out A Full Thor's Best Build In Detail Here

Get Sledgehammer and Slide Smash first to get used to evade and sprint attacks. After that, prioritize skills which have high stun damage such as Hammer Spin and Bring The Thunder. If you use ranged attacks frequently, learn the skill called Headstrong (under the Hammer Skills category) as it also has high stun damage.

This is weird because it recommend Iron Man to focus on Might but not the Hulk...If anything Might should be the main thing Hulk focuses on, because of his hard hitting melee attacks. Hulk is primarily a melee damage dealer, and "tank" is more of a secondary role for him.