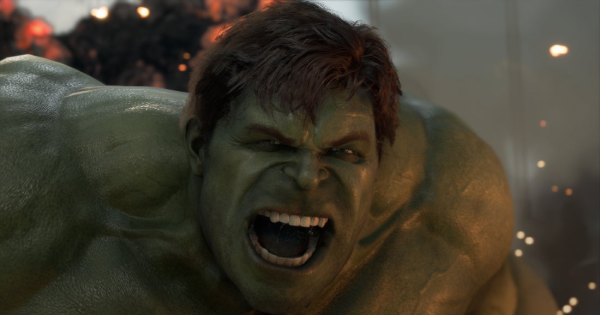 The Hulk relies on pure brute strength to deal with his enemies. If given the chance, he will also pick up enemies and thrash them around. Channeling his Rage allows him to stay in the fight, making him arguably the tankiest in the Avengers roster. He can immediately close the distance between him and his enemies or just traverse it by leaping.

Hulk will taunt nearby enemies and attract them to rush towards you.

Hulk will charge forward and grapple the first enemy he comes into contact with, then plow through the rest. Upon the end of the charge, the unfortunate enemy will be slammed to the ground, causing massive damage to it. It will also stun nearby enemies.

The Hulk smashes his hands together with tremendous might, causing a shockwave to blast away all enemies in his vicinity.

Check Out A Full Hulk Build In Detail Here

The voice actor of Bruce Banner is none other than Troy Baker, whose other famous roles include Joel from The Last of Us series and Booker DeWitt from Bioshock Infinite.

Hulk's voice over is done by Darin De Paul. Other famous roles he has done are Quan Chi from Mortal Kombat Legends: Scorpion's Revenge.

A massive dose of gamma radiation transformed the brilliant but meek scientist Dr. Bruce Banner into the jade giant known as the Hulk. When he reaches his emotional limit, Banner transforms into an immense, rage-fueled beast with superhuman strength, endurance and durability. The Hulk constantly battles with uncontrollable anger, but is a fierce companion on the battlefield. Not long after the tragic events at A-Day, Bruce Banner retreats into a permanent state as the Hulk, withdrawing to an abandoned Helicarrier in Utah and isolating himself from society.