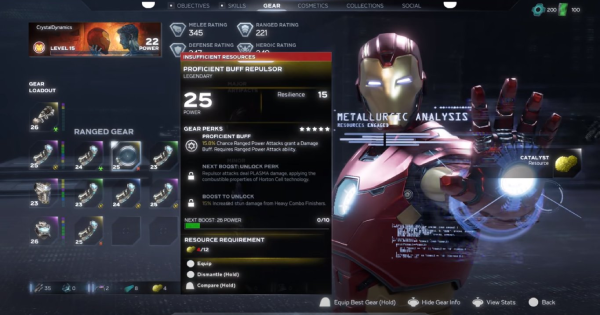 Read this Marvel's Avengers Game 2020 guide on full list of gear and equipment in the game! Find gear for each character, rarity, stats, Gear Perk effect and more!

Check Out The Best Builds Guide From Here

*The following gear includes items identified throughout our gameplay.

What Is Gear & How Progression Works

Gear is equipment unique to each hero which improves their attributes. Gear also has perks which give your hero a unique bonus.

The Higher The Rarity, The More Perks Unlock

Rare gear has more unlockable gear perks. In order to get said perks, you'll need to upgrade your gear with Resources.

Learn How To Get Resources From Here

Gear Is Named After Its First Perk

The name of a piece of gear is determined by its first gear perk. You can tell which gear perk it has from its name.

Gear Perk Is Named By Its Effect

You can tell a gear perk's effect by its name. A perk's name can be divided into 2 parts. The first half mostly defines what triggers the ability, and the second half defines the effect.

How To Get Better Gear

How To Get High Rarity Gear

Gear can be found in various way; in chests, from enemy drops, and from mission rewards. Elite AIM units tend to drop higher rarity gear.

Do Missions That Drop Lots Of Loot

Taking part in missions with lots of bonus objectives, or which otherwise drop a lot of loot, is your best bet for powering up your gear. Remember that drops will scale with your power level, so you'll want to level up all your gear evenly. Note that harder difficulties do not award higher level gear!

Check Out How To Increase Your Power Here