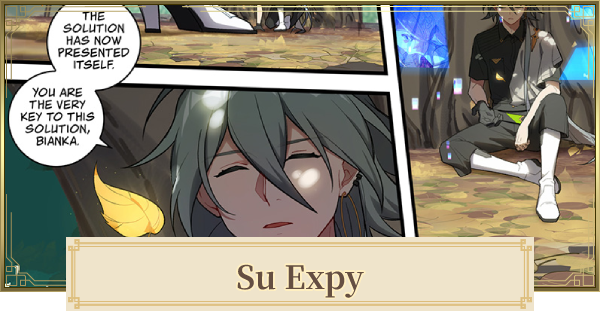 This section is based on rumors and speculations. Check back for more updates regarding Su.

There have been no announcements regarding Su's appearance in Genshin Impact as of yet. Rumor has it that he might make an appearance in Sumeru, although it is not confirmed whether it will be on Version 3.0.

According to rumors from the Genshin community, Su might be an upcoming 5★ character that has a Dendro vision. His appearance was said to be different from his Honkai counterpart.

Su is a secondary character in the Honkai Impact: Second Key manga series. He used to be a doctor who desperately tried to find a cure for the Honkai sickness. Rumor has it that his Genshin counterpart has a close relationship with the Dendro Archon.

Created The Seed Of Sumeru

Su is a Pioneer of the Previous Era and the one in charge of Project VALUKA, a task that requires him to conduct virtual analysis on other worlds in order to find solutions to defeat the Honkai.

This section is based on rumors and speculations. Check back for more updates regarding Su.

Su is rumored to be an upcoming Dendro character from Sumeru. There is currently no information regarding his playability, weapon, and lore.