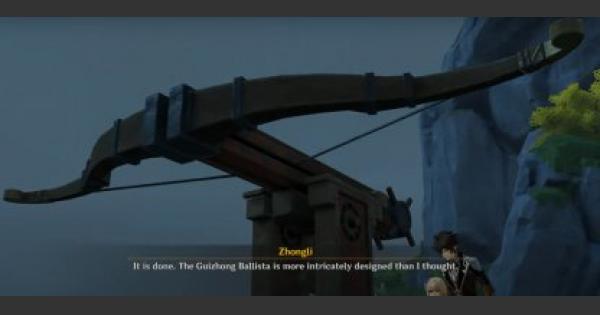 Crossbow is a rumored new weapon in Genshin Impact. Guide includes the rumored weapon's main idea, rumored design, what are the expectations by the players and more.

There have been rumors that a new weapon type will be implemented in Genshin Impact. There are actually multiple weapon types being discussed in the Genshin Community such as the Crossbow and Scythe.

What Is A Crossbow?

Just like in other RPGs, Crossbows are long-range weapons similar to the Bow. Crossbows are heavier and a more powerful weapon type than the normal Bow.

What Does It Do?

Crossbow shots are more powerful than your typical arrow shot. It's said to be more accurate as well, but the drawback is that it takes a long time to reload.

▲The Guizhong Ballista. We might get a smaller variant of it in the future.

In the lore, Guizhong created a huge crossbow mechanic called the Guizhong Ballista. She created this weapon in order to protect the people residing at that time in the Mt. Tianheng area.

Have Any Idea About This Weapon Type?

Just by thinking about this rumored Crossbow in your mind, what do you think would be its mechanics? Why not let us know in the ▼Comments below!