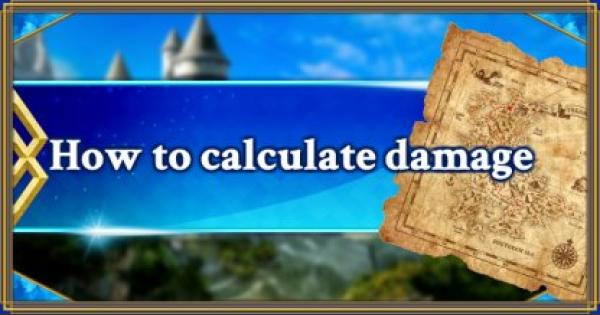 FGO | Fate/Grand Order
How to calculate and increase damage

Here you will find damage calculation formula for FGO. Information on buff effects and special attacks is included.

There are various factors that may influence damage in FGO besides servant affinity, such as Card Combination, Servant Attributes which are hidden in the game. Not to mention the impact of Craft Essences and Skill effects.

Remembering this will help a lot

Knowing how to count an amount of damage correctly, you will start using servants' skills more efficiently. It will also help you do quests more easily. So, let's figure it out once and forever.

Servants in FGO have a certain class (Saber, Archer and etc.) which determines affinity within relation to each other. In general, if a Servant is effective against a certain class he will do x2 damage to it and 0.5 times if not effective. Same implies to received damage.

There are some exceptions

▲For example, Lancer can do double damage to Archer

▲Berserker do 1.5 times damage to all classes except Shielder, but at the same time receives double damage.

There is an ATK modifier which varies by a servant's class.

This information is hidden in the game. However, there is a damage modifier which varies by a servant's class. For that reason, the ATK information that written in the game might be slightly different from the actual amount of damage.

▲Assassin's ATK damage modifier is 0.9, which means he will deal a bit less damage than his ATK number shows.

「Attr」in FGO is Servant Attribute information which is hidden from the game. The Attr relation reminds a triangle, as a servant does 1.1 to an enemy he/she is strong against, and 0.9 to those the servant is weak to.

[Star] and [Beast] are exceptions

[Star] and [Beast] are not included into that Attr triangle. They both deal 1.1 times damage to each other and there are no Attrs they are weak to.

▲Same name, different Attr! For example, Vlad (Berserker) who is drawn as a Vampire has「Earth」Attr, but pictured as a historical hero Vlad (Lancer) has「Mankind」.

There are roughly 4 groups of skills

Skills of the same image groups are summed, others are multiplied.

Servan Skills and Stats enhanced by CE are Roughly divided into 4「image」groups. If they are belongs to the same group ATK buff is going to be summed, otherwise calculated by multiplying.

Combine skills which background image is different, thus the damage will be multiplied instead of being summed. Skill mix can help you significantly raise your damage.

Whenever you see「ATK UP」that means a Skill or a CE increase your attack.

Whenever you see「Card effectiveness UP」it means that a skill or a CE is going to strengthen the effect of cards of the same type (Buster, Quick and etc.).

The effects such as「Madness Enhancement」「Territory Creation」「Riding Skill」which are determined by a Servant Class are also calculated here, in this group.

3.Labels other than ATK/Card effectiveness

Mainly they increase Critical damage or damage caused by the NP.

「Special Attack」to specific enemies is also included into this group.

Skills and Craft Essences labeled「Special Attack to ~」plus 「attack bonus」effect that can be used during Time-Limited Events are all calculated here. However, NP Special Attack refers to the next group!

Summary of the group

Special Attacks caused by the NP are different from Skill or CE Special Attacks. There are almost no other effects that are calculated in this category.

Summary of the group

※To simplify things some numbers presented here might not be exactly as in the game, so that you could get the main idea from the images.

When ATK buff and NP buff are used, their effect will be multiplied because they are in different image groups. In this case the formula is going to be 1.2*1.2=1.44.

In order to deal a bunch of damage you should combine various effects which come from different image groups. Especially if we are talking about the effects of Skills and Craft Essences.

DEF UP Skills reduce received damage by %. For example, if you have used 20% DEF UP buff you take 20% less damage.

It is possible to reduce ATK to 0

Stack multiple DEF UP and ATK DOWN effects and reduce enemy attack by 100％. It will especially help you on high difficulty Quests.

▲Using this technic you can even avoid the Enemy NP!

When Skill and CE effects are combined

If both CE and Skill have 「20% DEF UP」Buff, the effect is going to be multiplied and as a result you will get a 40% damage reduction.