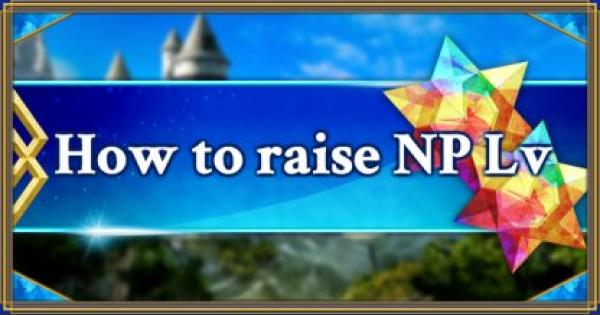 In this post, we are describing how to raise NP levels and the specifications of OC(OverCharge) from FGO(Fate/Grand Order). Feel free to refer to to contents if you would like to know more about the NPs and its specifications.

How to raise the NP level and its benefit

How to raise the NP level

The level of NP is raised by using the same servant with NP enhancement. The maximum NP level is 5 and there is no difference among rarities.

It will be indicated immediately after the effect takes place

The benefit varies depending on the servants

Damage delta in general based on the rise of NP Lv

What is NP OC?

NP OC stands for Noble Phantasm Over-Charge, and means that NP gauge gets charged beyond its limit of 100%. In general, OC becomes possible by raising the level of NPs. Some exceptions are CE or skills that also enable the OC.

The benefits of NP OC varies depending on the servants, and the effect indicated immediately before the “<〜 with OverCharge>” becomes enhanced.

Upper limit of NP is determined by the level of NP

Upper limit of NP gauge in the event of NP OC is determined by the level of NP. Although it can charge up to 300%, it is actually inefficient to charge the NP gauge to 300% so there wouldn’t be many opportunities for it to be used.

Upper limit of NP gauge for each NP level

OC is also possible by skills or CE

A bonus of NP chain will take place by selecting two or more NP cards. Obviously two servants will be required that have their NP charged.

It doesn’t necessarily mean that it increases the damage directly

If a NP chain is created, OC bonus is added based on the order of the selected cards. It does not directly increase the damage, but different OC effects will be applied to each NP.

More details on the order and the OC bonuses