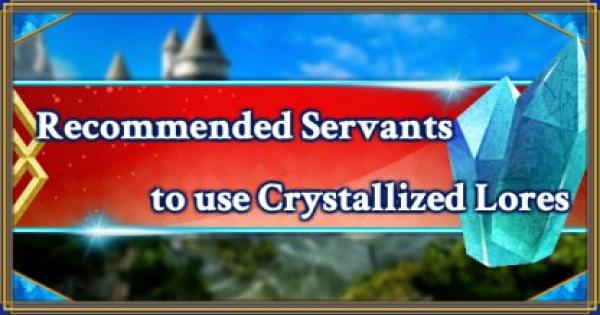 Tap to How to use Crystallized Lores

The servants you should be using

In general, priority goes to the NP gauge charge useful for farming

Prioritizing the skills that change the amount of NP charge

It is recommended to use Crystallized Lores on skills of NP gauge charge. It is especially so if raising the skill level from 9 to 10 would make sufficient NP gauge for farming. Also note that skills that do not change its charging amount would have lower priority.

Prioritizing the skills for which the CT is important

Reducing the skill CT enables mutiple usage of skills in a single battle and the turn in which you receive the skill effects becomes longer. It is strongly recommended if you want to use skills multiple times in the battle or if you want to continuously receive the effect.

Supporters are usually composed in decks regardless of their class, therefore used frequently. Especially those with “Avoidance of effect on all”, “Invincibility” or “Increased defense” are frequently used. Supporters should have the priority if your goal is to complete the hot spots of the story or the high difficulties without any C.Spell.

Apply Debuff which is a probability based skill can land on an opponent without any resistance to Debuff by raising the skill level to 10. Those that have 100% success rate of blocking the opponent’s NP with Decrease Charge or Apply Stun directly affect the operation. Stronger the opponent is, more useful it is.

The servants with the priority of using

Servants with the top priority

Servants with the second priority

All these stuff so far should be placed high priority

Servants that may be worth leveling up

Who should you use the first obtained Crystallized Lore on?

NP of Arash has not only a very high damage, but also an ability to make his state “unable to fight” by himself so that it is easy to switch with the next servant, making it a good candidate for farming. Since it is easy to grant 20% NP by support skills, just the 50% NP Charge from the event Craft Essence makes it easier to use instant NP.

NP Charge of “Unyielding Will A” becomes 30%

Spartacus is an omni-NP berserker of which attack has advantage over almost all classes, making it suitable for farming. Since it is easy to grant 20% NP by support skills, just the 50% NP Charge from the event Craft Essence makes it easier to use instant NP.

Once you have setup for farming, get ready for the strong enemies

Once you don’t have to struggle with the easy farming, Matthew is the recommended piece which is frequently utilized at difficult points of the story or in the high difficulty quests. Similarily to ★1, it uses very little skill materials or QP consumption and grants you great effects at low cost. At first, skill 1 is our recommendation for the purpose of reducing the CT.

There can be some exceptions as to the priority order

If you possess any NP Charge CE

If you have more than one of “The Imaginary Element” with max limit break or Kaleidoscope. NP Charge Skill of Arash or Spartacus can use instant NP without leveling to 10. Lvl 10 is a huge merit although having multiples, but the priority would still go down.

If you possess Zhuge Liang

If you have Zhuge Liang in your hand, you can grant a total of 50% NP to a single card by borrowing another Zhuge Liang from one of your friends. By combining with Chaldea’s combat uniform “Order Change”, you can choose to postpone the training/raising for the one who has a NP Charge Skill of 30%

Possessing any that has more than 30% of NP Charge Skill

Servants with NP Charge Skill of 30%〜50%, although mostly limited to ★5Servants”, can use instant NP at ease since level 1. Although there are advantages regardless of classes such as ★1 Arash or Spartatcus leaving due to being unable to fight, the priority can be somewhat lowered.