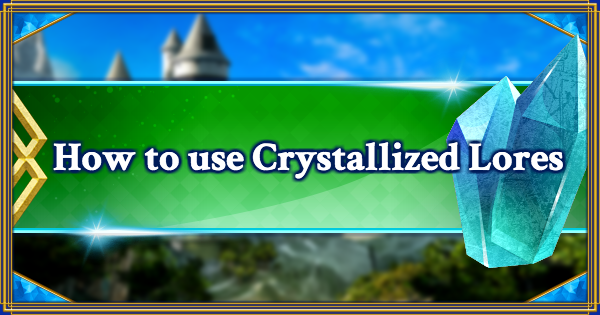 FGO | Fate/Grand Order
How to use Crystallized Lores

Here we are describing “Crystallized Lores” in regard to FGO(Fate/Grand Order). This column describes how they should be used, how to obtain them and whether or not to use them on Mash, and please feel free to use it as a reference for your research on the Crystallized Lores.

How to use Crystallized Lores

Crystallized Lores
A highly pure crystal of magic created
when human history crosses a stream of
Mana.
It can be said that it is the ingredient for
materializing Heroic Spirits.

Items for leveling up the skills

Increasing the skill level from 9 to 10

Skill effect is amplified while the CT is reduced

There is only a limited number that can be obtained

There are no quests in which Crystallized Lores will be dropped meaning that they are not obtainable anytime you want. They are mainly obtained through events or by exchanging for Rare Prisms and are limited in numbers available.

How to obtain Crystallized Lores

They are mostly obtained through the events

Crystallized Lores are basically obtained as a gift through events or as a reward by completing certain quests. Average of two or three are rewarded in an event or even four of them if you get lucky.

They are also exchangable for Rare Prisms

Since the october 2016, Crystallized Lores have been added to the exchange list of Rare Prisms. Beginning from the 15th of each month to 14th of next month, you may exchange for up to one Crystallized Lore. However, it takes as many as five Rare Prisms so this option may not be of your priority.

Should be used on Mash?

Pros of leveling up the Mash’s skill to 10

CT of the superior defense skill will be 5

Mash’s skill 1 “The Honorable Wall of Snowflake” is a superior defense skill which can increase your ally’s defense as well as blocking out a portion of damage done to you.

Skill 2 “The Time-Smoldering Wall of Chalk” can increase NP of the target depending on the level, at level 10 the NP gauge will be increased by 20%. If you have a Kaleidoscope which is a Craft Essence with NP of 80% Charges, instant activation of Noble Phantasm would be possible.

Cons of leveling up the Mash’s skill to 10

There are really no cons

There are really no cons of leveling up the Mash’s skill to 10. Leveling him to 10 is your priority since he can be an excellent tanker to defend your allies.

If anything, there aren’t many pros for the skill 3

Skill 3 “The Rousing Shield of Determination” grants oneself a target concentration as well as an increase in the NP obtained. Although being an excellent skill, there aren’t as many pros going from level 9 to 10 compared to the other skills.

They charge NP depending on the levels

There are many pros in skills which charge NP depending on the skill level. Especially recommended when it gets up to 100% by combining with the Craft Essence you already have or with the other skills that also charge NP.

Servants’ skills that are used in prolonged battles such as those in high level quests are also recommended. 1 extra CT is reduced compared to level 9, therefore the skill can be activated repeatedly. Holdups such as NP Seal, or Invincibility and Grant Immunity can be especially effective.

Those with little influence aren’t recommended

Reinforcement skills are also recommended, such as those that increase your ally’s ATK. However there may be some skills that would affect only a little or none at all depending on the level, therefore it is necessary to confirm whether or not the reinforcement of each skill is dependent on the level.