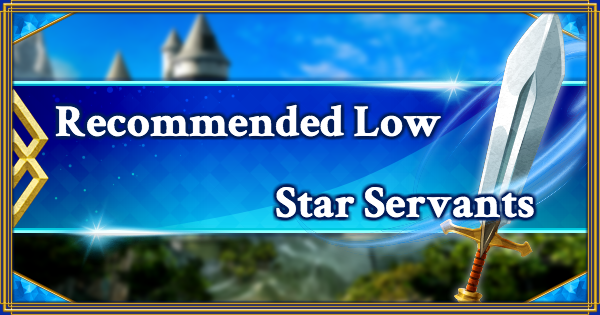 Low Star(1★/2★/3★) servants you should train. Browse worthwhile Low Star servants by category. Check out our 1★/2★/3★servants before you train them.

Servants every master should train

When to consider:
・if you want to train a vulnerable berserker as your main one
・if you want to play with a help of a friend with a strong servant
・if you were lucky to get 4★Siegfried at the beginning
・if you want a servant who is good starting from level 1

His first skill [Guardian Knight A+] will draw enemies' attacks to himself. As a result, you can minimize damage received by allies if Georgios takes most of the attacks.

Effective even at Lv1

Even if the skill level is not yet developed, you can already start using it effectively. Although it is difficult to survive 3 turns when your HP are low, but you can still benefit a lot from using Georgios in combination with other servents.

▲In case Georgios dies in the battle, which is more likely to happen on lower levels, choose a craft essence, that takes effect after a servant’s death..

Combining Georgios's NP [Ascalon] with Siegfried will bring you pretty good results. Since Siegfried can deal an extreme amount of damage to [Dragon] enemies, the combination of two may come in handy. If you could pick up Siegfried in the early stages, training him is definitely worth it.

When to consider:
・if you cannot avoid enemy NP
・if you need an archer with single-target NP
・if you are looking for a servant effective starting from the 1st Ascension

Performs well on any Quest

Has a self-target [Defence UP] skill that can minimize received damage by half for 1 turn. In addition, has an ability to grant your servants immunity for a single attack. His third skill [Attack UP] can can provide your allies with a good support.

Fits well into your servant composition

Although this is not something that you have to worry about unless you are familiar enough with the game mechanics, but using servants who have 3 Arts cards has its strengths. By using him alongside servants based on Arts cards, you will have more chances to trigger chain attacks gaining NP faster and dealing more damage.

No need to focus on Skill variety

Tristan 4★, just like David 3★, has an ability to grant allies immunity, but both are worthwhile to be trained.

When to consider:
・if you got Chaldea Combat Uniform
・if you gathered all materials to upgrade Amadeus
・if you know how to get the most out of criticals stars
・if you got servants based on critical attacks

Acquire a lot of stars easily with the 1st skill

The greatest thing about Amades’s 1st skill is that you can gain 20 critical stars. The amount of stars gained increases by 3 with each level. You can get 50 of them once the maximum level is reached. Thus, your allies will get a huge amount of criticals stars and gain NP much faster.

Another strength is a 1 turn enhancement of Arts cards. It varies from 22% on level 1 up to 44%(MAX level). It also helps with NP gaining, which makes this ability more valuable.

Things to keep in mind

You will experience a long cooldown unless you raise the skill level. You will have to use rare materials to level up. As Amadeus’s attacks are weak, good timing means really a lot here. Since there are a few more things to consider, it might be a good idea to keep Amadeus for later, in case you do not have a strong friend as a main attacker.

When to consider:
・if you get craft essence which gives 50% NP boost
・if you reserved a High-Rarity servant, but still have not reached your cost limit
・if you are going to farm hard

His second skill gives 10% NP boost (30% max lvl). It is possible to trigger NP instantly when combined with the right Craft Essence or Servants. As a berserker with a powerful NP he is good against any class.

Take him to farm on Blaze, Vault or Event quests

Clear enemy waves just by leveling up or using ATK Fou on Blaze or Vault. He is quite versatile on Event quests. If your enemy has got HP lower than 30000, taking one down will not be a problem.

He has a lack of survivability due to the slow HP recovery and reliance on [Guts]. In the early stages can be used as a low-cost attacker when necessary. Still, since his max HP are pretty low, you might get into trouble unless you have some defence elements.

Requires much effort to reveal his full potential

You might have to go over [Rank Up Quest] multiple times to gradually upgrade this servant. Even if you are going to use him for farming purposes, you will have better results after his Ascension is maxed out.

When to consider:
・if you got Craft essence that gives 50% NP boost
・if you completed training of another attacker
・if you are going to farm hard

Alike Spartakus his third skill boosts HP by 20% (30% max lvl). It is also possible to trigger NP instantly when combined with the right Crafting essence or servants. His multi-target NP is relatively strong and easy to be triggered several times in a battle.

One thing you have to keep in mind is that he does not perform well as a fighter himself. After NP deathrattle he will bring the next servant into the fight without a need for order change.

Despite the high win rate, requires some effort to reveal potential

Like Spartakus it is best to take him through [Rank Up Quest] for a couple of times. As he also works best when the Ascension levels are maxed out, you might want to avoid making this servent your top priority.

Servants who get strong after the 1st Ascension

Servants you can count on in the battle

Servant who can handle even the most difficult tasks

Extra: Train this servant to get 10 Forbidden Pages

Worthwhile to complete the 1st Ascension because of Interlude

Complete the 1st Ascension and Bond Lv1, clear 3rd Singularity to unlock Interlude. In order to unlock Interlude quest for Edward Teach, you have to complete the 1st Ascension, reach bond. lvl 1 and complete Capture 3. You will get 10 Forbidden Page as a reward. Since this item is essential starting from the early stages, it is worth leveling Edward Teach up a bit to get those 10 pages.