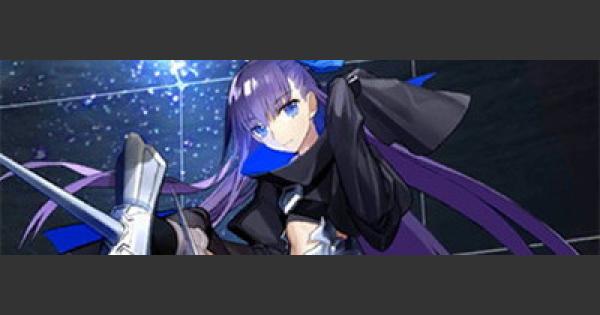 Learn all there is to know about 『Meltryllis』 in FGO(Fate/Grand Order)! Guide includes Ascension / Skill Items, Stats, NP, Skill & Review.

High damage to many Classes

The Alter Ego Class deals . Besides, it causes double damage to the Ruler Class, which usually takes half damage only.

Ineffective against Sabers, Archers and Lancers. That is exactly why you’d better take Alter Ego servants on any Quest where you won’t face those 3. Or if you do, you are going to need the help of supports or CEs.

3.Don’t take increased damage against other Classes except Berserker

In terms of defense the Alter Ego receive 1.5 damage from Berserkers and 100% damagefrom all the rest. As there is no class which takes half damage from another, you don’t have to worry about your enemies’ attacks much on any Quest regardless of an enemy class.

The Alter Ego gains stars faster than Casters but slower that Raiders. Instead of taking only Raiders or only Casters into your party, adding 1 Alter Ego despite a low number of stars will make it easier to go for Critical Damage.

With Quick cards you can easily gain C. Stars and the NP. Thus, doing critical damage you can aim for successive NP attacks. His 2 Evasions and an NP debuff will help you to caunter enemies’ NPs. Recommended for High Difficulty Quests where Raider, Caster, Assassin or Berserker enemies are.

▲Meltlilith’s Quick cards easily take effect of the 1st card bonus, so you gain a lot if you put Buster or Arts card first in chain.

Meltlilith’s single-target NP removes a buff from an opponent after damage is dealt and apply Quick effectiveness UP to self to 3 turns. The effect increases by 10～30% with OverCharge. As a result, Quick cards can charge the NP even faster so the NP effect is always present.

"Crime Ballet A" Skill grants her 2 attack Evasion for 3 turns and 5～15 C. Star Gain Effect. If you already got a 20〜30 C. Star drop rate, causing a bunch of Critical Damage shouldn’t be a problem for you. The CT takes just 7～5 turns before you could use it again.

▲Keep in mind that the Evasion effect disappears in 3 turns.

4.Combine "Sadistic Constitution A" with the NP

"Sadistic Constitution A" Skill increases ATK by 10～30% for self but reduce DEF by 10% for 3 turns. As a rule Meltlilith takes 100% Damage from any class, so you can’t really adjust class affinity to reduce received damage. That’s why you got to use "Crime Ballet A" Evasion effect to compensate.

"MeltVirus EX" Skill reduces the NP strength for all enemies by 20～50% for 1 turn. Combining 50%NP DMG DOWN and 50%DEF UP effects result into 1/4 damage. Thus, you can counter enemies’ NPs, although you’ll need to level up the Skill.

▲Damage dealt before the effects are applied. The other 2 allies use Evasion

▲DEF UP＋NP DMG DOWN are applied. She does pretty well.

"MeltVirus EX" Skill also increases NP strength for herself while debuffing all enemy NP by 50%. This Skill empowers your own NP while countering enemies’ one.

"Magic Resistance A" Class Skills are not as good as Debuff Removal or an effective Debuff Resist UP skills, but they handle minor debuffs easily.

"Riding Skill" and "Independent Action A" Class Skills apply Quick Effectiveness UP and Critical DMG UP effects to herself. Due to her "Divine" Attr, she can benefit from some special skills which for example Stheno have.

Meltlilith’s Quick cards have 4 hits, which means you can gather an awful lot of stars with just 2～3 cards. Moreover, if you place Arts card 1st in chain you can gain the NP with Quick cards as fast as you would with Arts. So try gaining both the NP and C. Stars always aiming for Critical Attacks.

▲Due to the Overkill mechanics, almost finished off enemies are going to be your NP boosters.

Meltlilith’s NP card hits 8 times, EX card 6. Just imagine how many stars is that. You can deal a whole lot of Critical damage combining NP+Q+Q+EX(40 Stars) with「Crime Ballet A」. Also if the first card is Arts, EX card will charge your NP a lot.

▲With Arts 1st Card Bonus the NP can be easily gained with Quick as well as with EX cards.

Her weak point is that she doesn’t reduce received damage from any class, although she doesn’t take double damage either. You need to compensate for that during long-lasting battles or High Difficulty Quests. Raising Skill Lvl ro reduce CT and other servants’ DEF UP buff would help.

In general, it’s hard to get enhancement materials for the EXTRA Class. Even though all skills Meltlilith has are extremely helpful, raising up her skill levels is going to be really tough.

2.Goes well with Casters and Assassins

No need to worry about Casters and Assassins having a lack of Buster cards because Meltlilith has 2 of them. You can easy raise your Party damage by placing her Buster card 1st in chain.

▲She gains as many stars as Assassins. In party with Raiders or Archers she is going to help them with C. Stars either.

In FGO when you take damage your NP chargers per 1 hit. If an enemy hits many times with the NP he also chargers yours. If you use「MeltVirus EX」or Evasion enemy NP attack is going to be another chance to charge your NP together with Critical Damage and Overkills.

It’s hard to counter enemy NP using just one servant. Merlin or David can help all allies to evade it one time, but their skills are usually not in time for the second NP attack. However, if you got something else to counter the NP, your servants are going to be noticeably more durable in a battle.

(Tap to open and close)