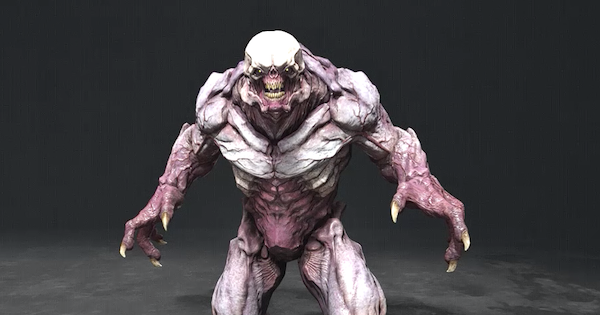 Read this DOOM Eternal guide to learn more about how to beat the Hell Knight / Dread Knight! Find out the demon's weakness, gameplay tips, how to beat, and more!

The lumbering Hell Knight is very weak against the Chaingun. It's slow moving frame can be gunned down easily, either downing it or making it vulnerable to Glory Kills.

Check Out The Chaingun Guide Here!

The Chaingun's Energy Shield Mod defends you against frontal attacks. Having it equipped against a charging Hell Knight completely negates all of its attacks, leaving you free to counter.

The Plasma Rifle can also mow down the Hell Knight with sustained fire. The player can move away from its attacks while continuously shooting it making it easy to dodge and kill the Hell Knight.

Heat Blast Is A Recommended Mod

The Heat Blast mod stores up the heat produced from firing the Plasma Rifle, allowing the player to release it in an instant to damage surrounding enemies. Use Heat Blast against the Hell Knight when it lunges forward to attack.

The slow wind up of the Dread Knight makes it very open to point-black Super Shotgun blasts. Dodge its attacks then use the Meat Hook to get in and blast it, then use dash again to move away. You can use this tactic until it falls.

The Hell Knight has no means to attack the player from afar. Use this to your advantage by continuously shooting at it and use well-timed dashes to dodge its attacks.

With great strength, the Hell Knight smashes the ground, dealing area damage. It executes this attack fast so use dashes to get away from this one. For the Dread Knight, this move has a wider area and damages those in its area of effect for a short duration.

The Hell Knight leaps into the air, smashing the ground as it falls down to deal heavy damage. It usually uses this move when the player is far away and can be easily evaded. Dash back to dodge this attack.

The Hell Knight swiftly leaps forward using its momentum to deal a damaging punch. It can connect this attack twice, allowing it to quickly close the gap after you dash back. To evade this attack, time your dashes to each of its advances.

The Dread Knight uses its blades, slashing at the air and creating a diagonal wave that travels towards the player. It uses this attack when the player is far away and it can easily be dodged if you have ample space to maneuver.