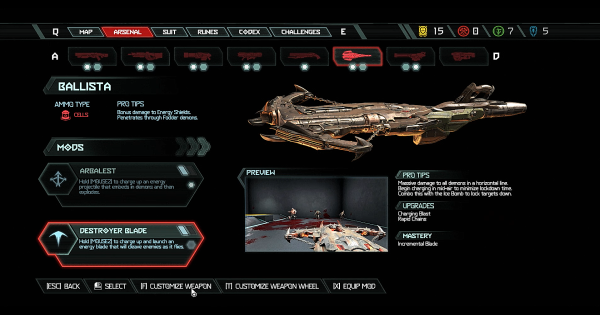 Check out this Ballista guide for DOOM Eternal! Contains info on all Ballista Mods, Upgrades, Mastery, & challenges, as well as tips on how to use it effectively!

Fires In a Straight Beam

The Ballista is high damage dealing weapon that fires in a straight beam. Due to its damage output, it is an excellent choice for targeting and destroying a demon's weak points. However, you will also need to be accurate to land your shots!

Despite the weapon's damage, its fire rate is somewhat slow. This is why it is recommended to use at long range, since it will not be able to keep up and defeat demons close to you!

Use in Conjunction With Other Weapons

The Ballista is best used with other hard-hitting weapons for a quick 1-2 combo. After firing the Ballista, switch to another weapon like the Super Shotgun, and deal tons of damage! This will circumvent the Ballista's low fire rate.

The Ballista uses cells as ammo, and consumes 25 cells per shot. Despite being a devastating weapon, it is recommended to use this weapon sparingly due to its large consumption of ammo.

The Ballista is extremely effective against flying demons. It will be able to take down Cacodemons and Pain Elementals in a few shots!

Can Also Be Used Against Heavies

Aside from flying demons, the Ballista is also a viable weapon to use against heavy demons such as the Arachnotron and Mancubus. The Ballista's high accuracy allows you to pick off and destroy enemy weak spots.

Get Ballista In Mission 5

The Ballista is unlocked when you return to your base during Mission 5: Super Gore Nest. After the first cutscene, head to the Ballista in the Fortress of Doom and interact with it to pick it up.

Check Out the Mission 5 Walkthrough Here!

The Arbalest mod will alter your Ballista's firing mode. After charging, it will fire a projectile that sticks onto the target and explode after a few seconds. This will also deal damage to an area of effect, hurting other enemies in the area.

It is recommended to focus on Stronger Explosion upgrade first as it will increase the explosion size, allowing you to deal damage to more demons during a fight!

The Arbalest will start recharging instantly after a direct hit.

NOTE: All upgrades need to be unlocked to access the Mastery Challenge and unlock the Mastery.

Kill 20 Cacodemon with the Arbalest.

By spending a Mastery Token, you can immediately bypass the mastery challenge.

Charging the Ballista will allow you to unleash a wide energy projectile in the form of a horizontal blade! As it flies forward, it will cleave most if not all enemies that are directly in front of you!

It is recommended to invest your Weapon Points into the Rapid Chains upgrade as it will lessen the charge up time, allowing you to move around the map faster during combat!

NOTE: All upgrades need to be unlocked to access the Mastery Challenge and unlock the Mastery.

Kill at least 3 enemies with the Destroyer Blade, 15 times.

By spending a Mastery Token, you can immediately bypass the mastery challenge.