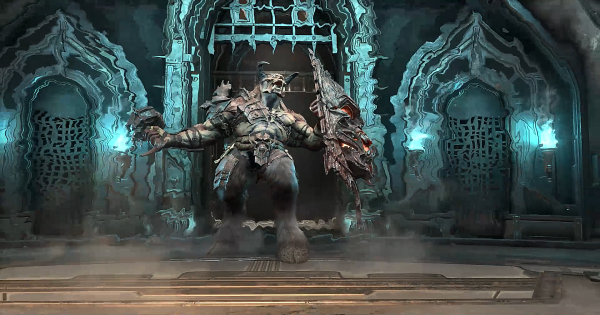 DOOM Eternal
Gladiator - How to Beat

Read this DOOM Eternal guide to learn more about how to beat the Gladiator! Find out the demon's weakness, gameplay tips, how to beat, and more!

Weakness Depends On Stage of the Fight

The Gladiator is a boss that you will have to fight during the Sentinel Prime mission. The fight will be divided into two parts. Depending on the stage of the fight, the Gladiator will have differing weaknesses and weak spots.

Keep an eye on the Gladiator's shield during the first phase of the fight. Its eyes are usually red, but will occasionally blink then turn green, just before the Gladiator attacks. Once it turns green, shoot at it to stagger the boss and close in for a Glory Kill to chip away at its health.

Check Out the Glory Kill Here!

During the second phase of the fight, the Gladiator will sometimes attack you by cornering you, and sending waves of electricity at you. The attack ends with a body check where the boss will dash at you. Dodge it, then attack. If timed correctly, the boss will stagger, giving you an opportunity to deal damage!

Weak to the Ballista

The Gladiator is particularly weak to the Ballista. Time your shots and aim at the boss' weak spots to stagger it often!

During the first phase of the fight, the boss will be shielded, limiting its movement. It will generally stay in the middle of the map and move slowly. Its attacks are generally telegraphed, and will give you enough time to react and evade.

The Gladiator's shield will blink, then its eyes flash green, signalling an attack. Quickly dodge to the side in order to evade this attack. Make sure to attack during this time as this is can stagger the boss!

The boss' will shake and hit its shield, and the whole shield will start to glow red. The shield will then send out a spectral form of itself and begin flying forward. This can easily be avoided by dodging to the side.

Once you deal enough damage to the boss, the shield will break, prompting the second phase of the fight. During this stage, the boss will start to dual wield flails, and start to move around the stage quickly. However, you can also slowly chip away at its health since it is not shielded anymore.

The Gladiator will start to twirl one of its flails, creating a circular yellow shield. During this time, it's best to avoid firing at the boss as hitting the shield will cause the projectiles to fire back at you. Instead, focus on moving and resupplying from fodder enemies in the area.

The Gladiator will launch its flails forward, usually aimed at your position. This is telegraphed by the boss winding up its arms or jumping up, so it is easily avoided by dashing away.

The boss will lock you in position by placing its flails on either side of you, and start to send shockwaves toward you. You can avoid these shockwaves by jumping over or going under them. It ends in a body check with the boss dashing forward at you. Dodging the body check, then attacking will give you an opportunity to deal big damage.

The boss will also have fodder enemies spawning during both phases of the fight to try and disorient and harass you. Luckily, these enemies are mostly comprised of easy to kill enemies that shouldn't give you to much trouble. You can also opt to resupply health, armor, and ammo from them.