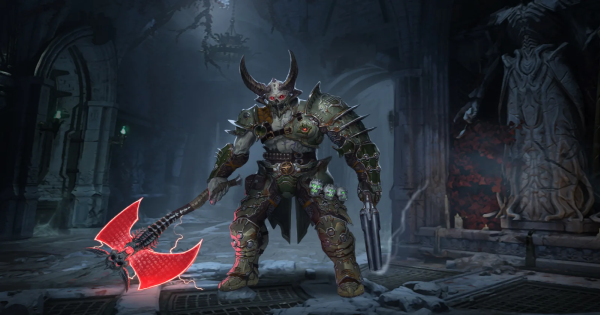 Read this DOOM Eternal guide to learn more about how to beat and play as the Marauder! Find out the demon's weakness, gameplay tips, how to beat, and more!

The Marauder is a strong enemy that is highly resistant to most weapons. It is particularly weak to the Ballista and Super Shotgun, but only when attacked at the right time. Attacking it outside of the window of opportunity will only cause it to bring up its shield.

The Marauder is also resistant to Super Weapons such as the Chainsaw, Crucible, and even the BFG 9000! Despite these weapons still dealing damage to the Marauder, it is recommended to face the enemy with a different strategy to avoid wasting ammo and charges.

The window of opportunity will appear during the Marauder's attacks. Watch the enemy's eyes, and attack the enemy when the Marauder's eyes start to glow green. This will stagger it briefly, allowing you to unload some damage to it!

The Marauder will only briefly be in a stagger state. If you are still close to it when it returns to normal, prepare to get hit by its Super Shotgun. Your best bet is to get a few good hits in, then immediately back away to avoid getting hit!

Leave This Enemy For Last

When facing a Marauder with a group of enemies, it is recommended that you run around and take care of other enemies first before facing the Marauder. The Marauder will demand your full attention so take out other threats to avoid getting blindsided by outside attacks!

Use Fodder Enemies To Resupply

Leave a few of the fodder enemies to help you resupply should you run low on armor, health, and armor!

Uses an Axe When Ranged

The Marauder will mainly use an axe to try and damage you. It can be used at mid to long range to deal damage to you.

The Marauder will lunge at you to strike when at mid range. This attack will also be when the Marauder's eyes turn green. Attacking it during this time will allow you to stagger it, giving you a window to attack.

Sends Out Projectiles at Long Range

The Marauder can also use the Axe to launch red projectiles at you from long range. Keep moving and use your dodges to avoid those projectiles.

Uses a Super Shotgun When Close

Getting too close to the Marauder will cause it to bring out its own Super Shotgun to blast you. It is a difficult attack to dodge, so it would be best to keep a safe distance away, and avoid giving it any reason to bust it out!

Occasionally, the Marauder will summon a Spectral Hound that will relentlessly chase and attack you. This is difficult to dodge since it is able to keep up with you even while you dash! Thankfully, it can be killed with a single Super Shotgun shot. Make this a top priority when it appears!

Protects Itself With a Shield

NOTE: This section was based off the multiplayer demo at PAX East. This will be updated as soon as more information is confirmed.

Can Be Played Aggressively

As a Marauder, you will be armed with an Axe and a Super Shotgun. You can use these weapons to play aggressively by throwing the Axe at long range, or by getting up close and personal to unload damage via your shotgun! If conditions are met, you can even summon a hound to attack the Slayer!

Check Out the Battle Mode Here!

Despite having a great kit for offensive capabilities, the Marauder will not have its trusty shield during fights. It is recommended to work together with your teammate to avoid sustaining too much damage from the Slayer!