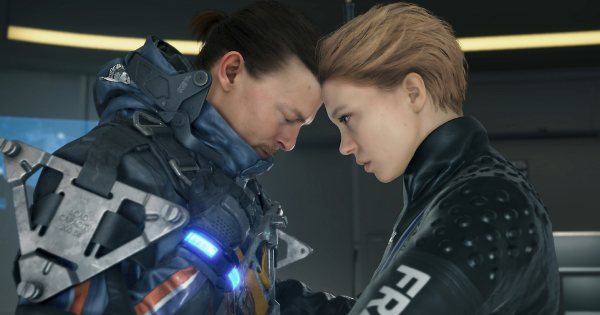 Check out this Death Stranding guide to know more about the game's lore. Including term definitions and explanations, glossary of terms, & more!

What Is The Death Stranding?

Death Stranding points to the cataclysmic event where explosion called Voidout numerously erupted across the continent, effectively destroying the nation & most its population. This event also supernatural entities such as BTs and Timefall occur across America. The cause and reason of this phenomenon is still unknown.

What Are BTs (Beached Things)?

Ghostly Entities From The World Beyond

B.T.s or Beached Things are otherworldly entities that have shown up on Earth after the Death Stranding incident. These ghostly figures cannot be seen with the naked eye and requires a special equipment called B.B. to find them. These beings cannot see the human but they can hear & sense lifeforms nearby.

Check Out How To Deal With BTs!

A Voidout is an explosion caused when a Beached Thing kills a human being by consuming them. This triggers a massive antimatter explosion, eradicating everything in its vicinity until all that is left are empty craters.

Timefall is a dangerous rain that falls on areas affected by Beach entities. These black rain rapidly ages anything it touches including human and non-living material at a rapid pace.

Check Out How To Deal With Timefall!

What Is A BB (Bridge Baby)?

A BB or Bridge Baby is a special tool used by members of the Bridges to help detect the presence of BTs. They are unborn babies taken from a stillmother's womb, thus indirectly being connected to the World of the Dead otherwise known as the Beach. These are placed in a portable pod that simulates the womb environment.

Check Out What Is A BB (Bridge Baby)!

BB's Connection to the World of the Dead

A Stillmother is a brain dead pregnant woman that the BB is originally pulled out from. The stillmother's connection to the land of the dead, known as the Beach, allows the BB to establish a trance connection with its users in order to sense BTs.

What Is The Beach?

Dimension Between The World of the Living and the Dead

The Beach is the in-between dimension between Earth and world of the dead. Considered a "Limbo" of this world, this is where and Chiral entities such as the Beached Things originate from.

Organization Seeking to Save and Unite America Again

Bridges is the massive organization led by Die-Hardman that is working together with Amelie to reconnect the United Cities of America (UCA) using the Chiral Network. Its affiliations are Sam, Mama, Deadman, and Heartman.

What Is An Odradek?

Odradeks are shoulder mounted equipment, and open up and scan the area for BTs using a trance connection with the BB. Bridges operatives & enemies such as Homo Demens & Mules all use this device.

Check Out How To Craft Equipment!

What Are Cuff Link?

Cuff Links are accessories worn by those affiliated with Bridges. It showcases the wearer's status, depending on their health conditions as well as serving as a digital map, serving more of a personal digital assistant.

Check Out the Cuff Links Here!

What Is The Chiral Network?

The Chiral Network is a unique connection system in Death Stranding. Created by Bridges, the Chiral Network aims to connect pockets of City States known as the Knot city and have them connect "online" in this pseudo-internet system.

Check Out The Chiral Network Here!

Key to Connecting the Chiral Network

A Q-Pid is a special necklace that contains specific equations. These equations allow connection to the Chiral Network and the Q-Pid is used in terminals to establish such a connection to connect each groups of civilization under the UCA.

What Is The United Cities Of America (UCA)?

The United Cities of America or UCA is a conglomerate of cities that make up the remaining citizens of America. It has several Knot Cities and aims to connect all together to be a united nation once more.

What Is A Knot City?

A Knot City is a city state in the UCA (United Cities of America). They are each isolated and run by independent government, using delivery men and services such as Fragile Express for main means of infrastructure. Currently there is Capital Knot City, Central Knot City, Lake Knot City, Port Knot City, and Edge Knot City.

What Is A Prepper?

Individuals Living Without Affiliation to Factions

Preppers are NPCs in Death Stranding who chose to live disconnected from certain groups and civilization. These are isolated individuals that make their homes in bunkers. Sam needs to make deliveries to them or complete some tasks in order to establish a connection with them.

What Is Fragile Express?

An private delivery company represented by an individual named Fragile. The company's branding and tag line is "Handled with love".

Mules are rogue deliverymen that have been infected with the Delivery Syndrome. They aim only to steal precious cargo, and not the delivery man's life, and such uses non-lethal weapons. They have bases where they keep their stolen goods.

What Are The Homo Demens?

The Homo Demens are an aggressive group that has taken charge of Edge Knot City. They are considered aggressive terrorists which exploit Voidouts and able to initiate the Timefall at will. They are deemed enemies of the Bridge.

DOOMS is a supernatural trait found in those with the Extinction Factor and have Chiral Allergy. Measured by levels, DOOMS effects are different from each person & can affect how they sense BTs or survive Voidouts.

What Is A Chiral Allergy?

The Chiral Allergy induces rash and tear shedding when near a Chiral object or entity originating from the Beach. This can be seen on Sam and Fragile.

What Is Extinction Factor?

A rare special factor only found in human beings with unique powers known as DOOMS.

A Cryptobiote is a small life form that is able to move between Earth & the Beach. When eaten, it is able to stall the effects of Timefall.

What Is A Chiral Crystal?

A Chiral Crystal is a crafting material normally be found in the Beach and in places where Timefall has fallen. When BTs are defeated, they will explode into a flurry of Chiral Crystals.

Thank you for making this guide! Great work~!